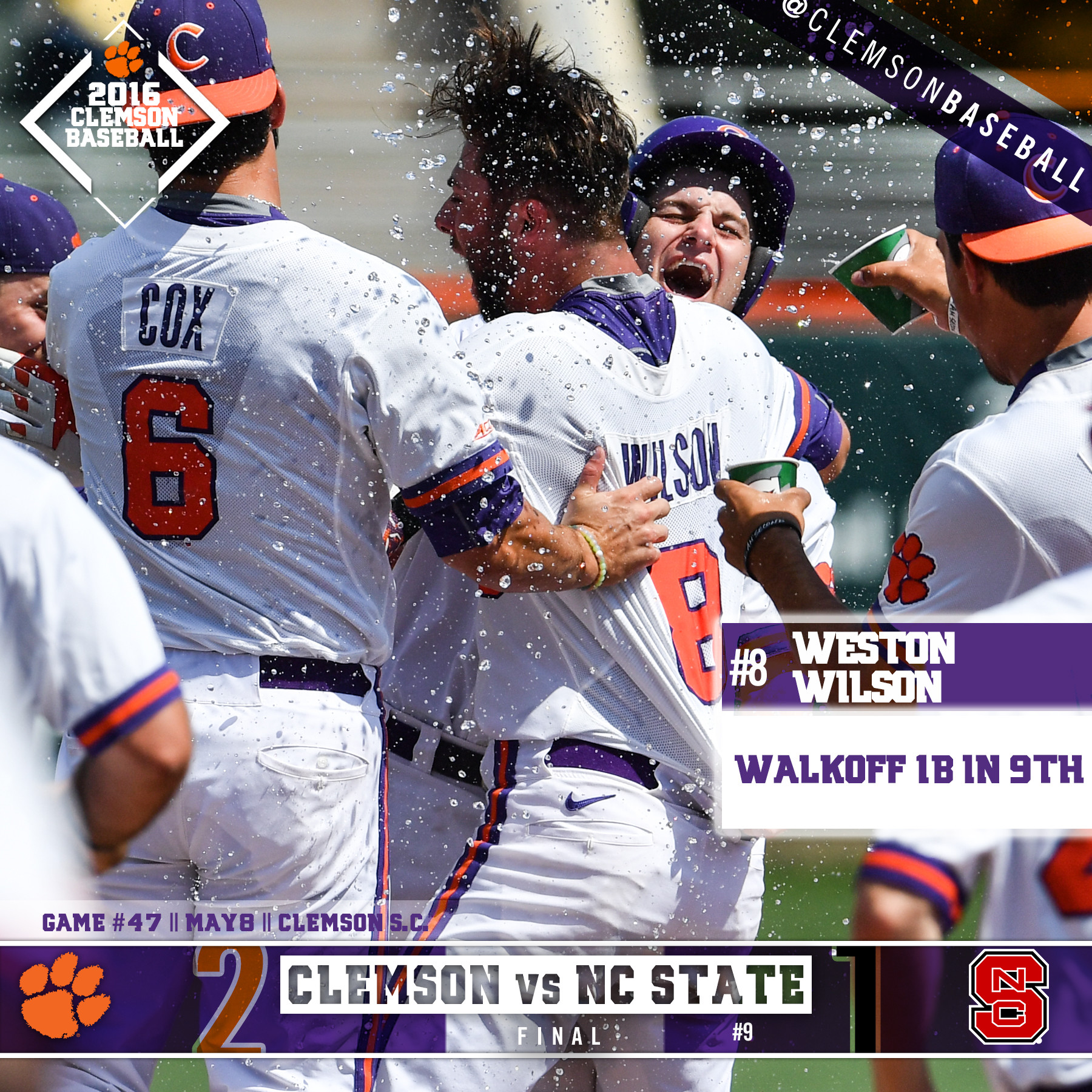 CLEMSON, S.C. – Weston Wilson’s walkoff single with one out in the ninth inning scored Chase Pinder in Clemson’s 2-1 win over No. 9 NC State at Doug Kingsmore Stadium on Sunday afternoon. The Tigers, who won the series 2-1, improved to 31-16 overall and 13-14 in the ACC. The Wolfpack fell to 32-14 overall and 13-9 in ACC play. The victory guaranteed Clemson a winning season for the 52nd consecutive year, the third-longest active streak in the country.

Pat Krall (8-1) earned his second win over a top-10 team this week (he pitched 7.0 scoreless innings against No. 4 Florida State on Monday) by tossing the first complete game by a Tiger in 2016 in his first career start. In a career-long 9.0 innings pitched, he gave up just five hits, one run and three walks with five strikeouts. Wolfpack reliever Tommy DeJuneas (2-2) suffered the loss.

Clemson took a 1-0 lead with an unearned run with two outs in the fourth inning after a Wolfpack error, then NC State tied the score in the sixth inning on Brock Deatherage’s two-out, infield single, the first run allowed by Krall at Doug Kingsmore Stadium in 32.2 innings pitched in 2016. Josh McLain led off the top of the ninth inning with a double, but Krall stranded him at third base. Pinder led off the bottom of the ninth inning with a single. After Seth Beer and Chris Okey walked with one out, Wilson grounded a 3-1 pitch up the middle and off the glove of shortstop Joe Dunand for the walkoff hit, Clemson’s sixth of the season.

The Tigers host College of Charleston in a two-game midweek series beginning Tuesday at 6:30 p.m., on ESPN3. Fans can purchase four tickets and a $10 concession voucher for only $30. Fans can also buy one regular-price ticket and get one of equal value for free.