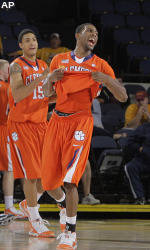 ANAHEIM, Calif. (AP) – With the game on the line, Clemson’s Demontez Stitt was right where he wanted to be.

“I like having the ball in my hands at the end of the game,” said Stitt, who gave credit to Clemson assistant coach Ron Bradley for his success. “Coach Bradley gave me some tapes of me hitting free throws in big games. I really thought back to those tapes and it really helped.”

Trevor Booker also blocked a shot and deflected an inbounds pass in the final second for the Tigers (6-1). Booker finished with 12 points and eight rebounds, while Andre Young added 12 points.

“We feel like we were good enough to come out here and win (the tournament),” Butler center Matt Howard said. “We felt that as long as we played well defensively, we were going to be able to move the ball and score.”

Stitt made both of his free throws with 3.3 seconds left but the Bulldogs had two more chances to score.

“That was a gutsy performance,” Butler coach Brad Stevens said of Stitt.

Butler’s Willie Veasley deflected Howard’s long inbounds pass to Mack, who took a 3-point shot that Booker blocked; the ball went out of bounds with five-tenths of a second left.

Mack tried to throw the ensuing inbounds pass across the court to Hayward on the right side but Booker leaped to deflect the ball as time expired.

Booker made his late impact despite being sick.

“I was worried if was going to make in through the first half at one point,” Clemson coach Oliver Purnell said. “Trevor said he was feeling weak so I just tried to nurse him. I think his competitive juices really started to kick in.”

Clemson shot 57.7 percent and made six of 13 shots from 3-point range in the second half.