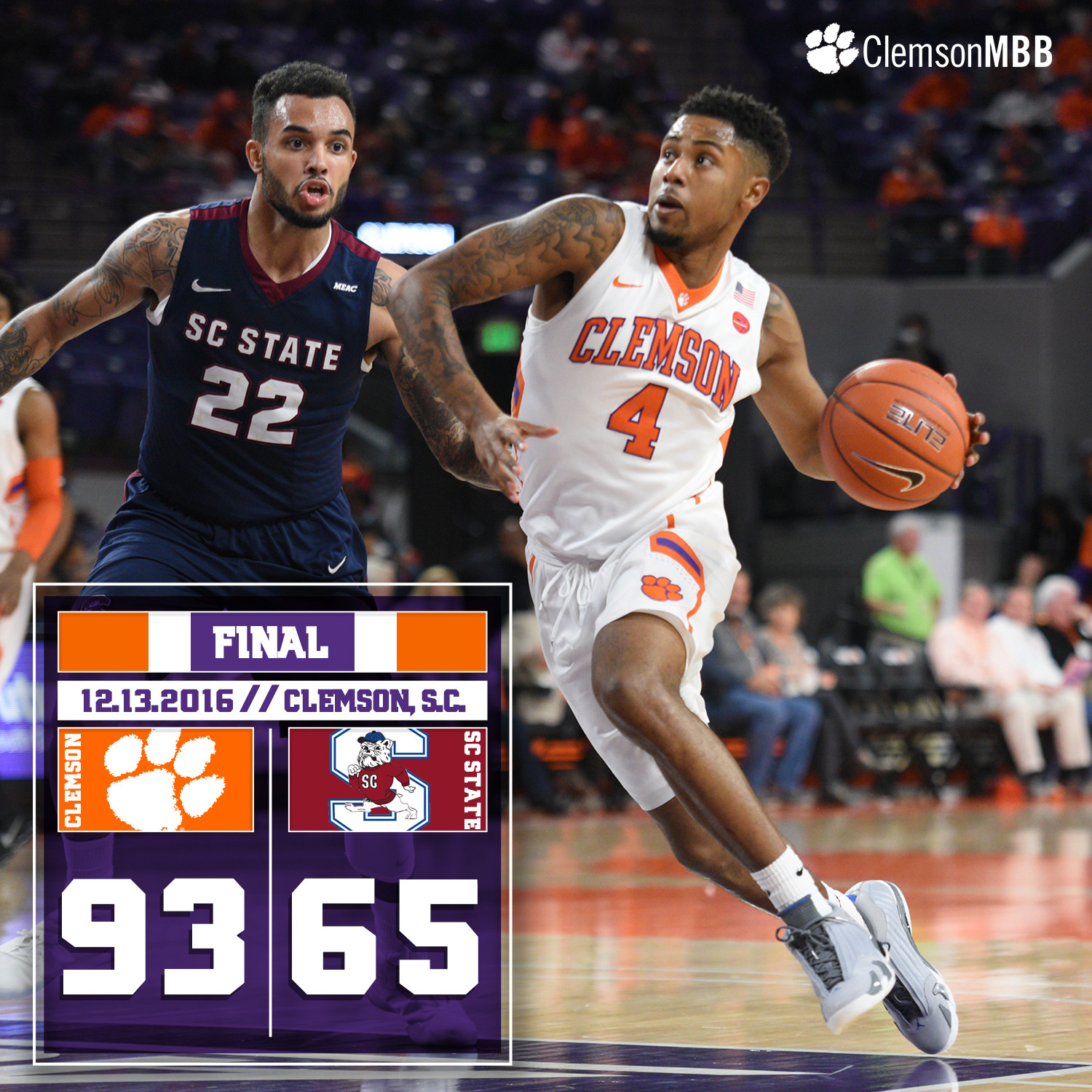 CLEMSON, S.C. — Jaron Blossomgame scored a season-high 29 points to lead Clemson to a 93-65 victory over SC State on Tuesday, the Tigers’ fifth straight win, all at home. Blossomgame moved into the top 20 in Clemson history in career scoring, surpassing 1,300 points. Clemson moved to 7-2 with the win, while SC State dropped to 2-8 overall. In all, the Tigers had four scorers in double figures, including Shelton Mitchell (14), Donte Grantham (13) and Avry Holmes (10). The Tigers had just two turnovers for the game, the second-lowest figure in program history. Clemson had 17 assists on 36 baskets and outscored the Bulldogs by a whopping 52-28 margin in the paint. Blossomgame provided early energy, going upstairs to land a couple of high-flying alleyoops. He posted 15 of his points before intermission, helping Clemson to a lead of as many as 13 in the opening frame. The Tigers saw SC State hang around, as the Bulldogs converted 50 percent of their field goal attempts in the opening 20 minutes of play. Clemson stretched its second-half advantage to 20 for the first time when Grantham emphatically followed a Holmes miss, throwing down a one-handed slam to bring the crowd to its feet. The Tigers take to the road against a pair of SEC foes, playing Alabama on Sunday, Dec. 18 in Birmingham, before facing rival South Carolina three days later in Columbia.

“This was a really good offensive performance. Certainly, having 17 assists and only two turnovers were big stats, as well as the 23 offensive rebounds. We knew, especially when they played small, that we could hurt them inside.

(South Carolina State) made us work into the second half, before we could pull away. Again, offensive efficiency was good. We probably took a few too many threes, but, other than that, I thought we played well. And that was the difference in the game.”

On Clemson’s early offensive success:“I think we’re playing about how I would’ve expected, maybe scoring a few more points. Some of the games, we’re heavily favored, and we’re playing that way.”