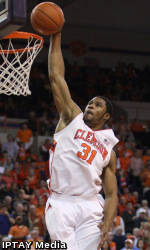 CLEMSON, SC – Brad Brownell was not happy with the look in his team’s eyes while they were warming up prior to Saturday’s noon tipoff against Wake Forest. Something was missing, so he addressed the issue with his coaches before his team’s entrance a few minutes before game time.

“I don’t know if we were ready for a competitive fight,” he said. “We were a little bit on our heels.”

Brownell’s fear came true once the game started as the Tigers missed 15 of their first 16 shots and the Demon Deacons built an early eight-point lead. But Brownell teams are known for leaning on their defense when things are not going well offensively, and thanks to a Andre Young, Clemson had its energy and never again let up in a 71-60 victory at Littlejohn Coliseum.

“That was the spark we needed,” Young said. “We got the steal, made the basket and all of a sudden the bucket got a little bit bigger. Guys just started hitting shots.”

No one hit more than Young, who scored a game-high 19 points to lead Clemson for the second straight game. He also had five assists. After his three-pointer made the score 12-7 Wake Forest with 10:28 to play in the first half, the Tigers made 10 of their next 16 shots to close the half.

When Tanner Smith drained a three-pointer with three seconds left in the half, Clemson found itself in front 36-29 at the break.

“I thought we started the game a little rusty and maybe a little nervous,” Brownell said. “We certainly did some things well, but we just did not make shots. We only had two turnovers in the first half and I thought our ball movement and our concentration was good, but we have had some problems at times scoring.

“We did not make any shots early, and I thought Wake came out and did some good things that caught us on our heels just a touch, but our guys rallied back and I thought for the last 30 minutes we played pretty well.”

Once Young, Smith and Devin Booker started making shots, the defense carried the Tigers home. Clemson wore down the Demon Deacons, who had very little depth. The Tigers forced 15 turnovers, had 10 steals, seven blocks and held Wake to 40.7 percent shooting, including 35.7 percent in the second half.

“We knew they did not play that many players so it was important that we came out with a whole bunch of energy and really try to wear them down throughout the game,” Young said.

Bryan Narcisse played a huge role in wearing Wake Forest down. His energy was what the Tigers needed early in the game and his three-pointer with the shot clock running down late in the second half put an exclamation point on the victory.

With the Demon Deacons trailing Clemson, 60-48, with 3:30 left, they desperately needed to make a stop if they had any chance. But with the shot clock dwindling down, Narcisse drained the trifecta from the left wing with two Deacons flying at him with 3:22 to go.

Narcisse, who along with Smith was presented his undergraduate degree prior to the game, finished the afternoon with a career-high 11 points and was 6-for-6 from the foul line.

Booker also brought energy to the Clemson bench as he played one of his more complete games, scoring 16 points to go with seven rebounds, three assists, three blocks and a steal.

“What I liked about his play was that after missing on a couple of plays around the basket early, that maybe in some days he might have hung his head, today he fought back through it and made some plays that were tough around the basket in the second half,” Brownell said.

Clemson will try to continue to play tough as it hits the road at Virginia on Tuesday, Feb. 1. The game will be televised by ESPN2 and tip off at 7:00 PM.