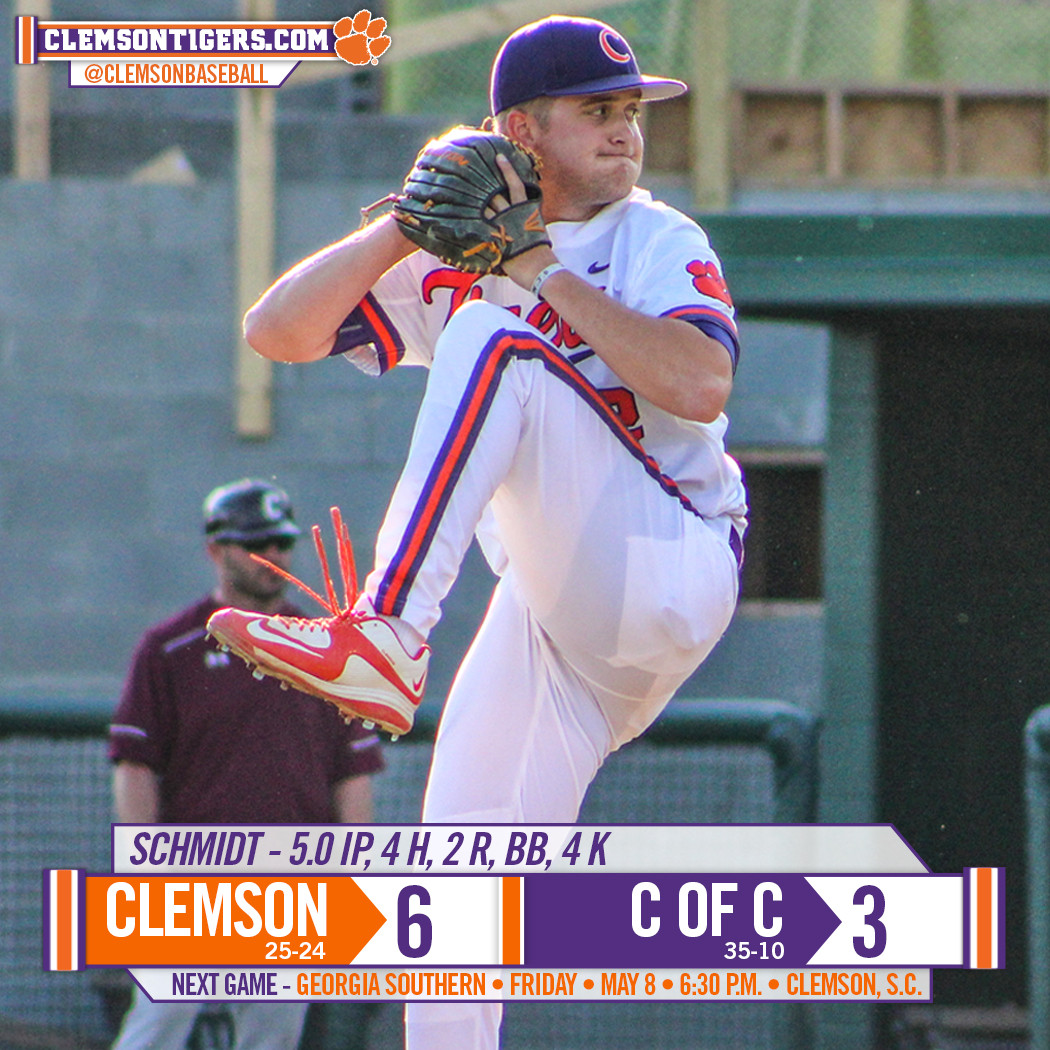 CLEMSON, S.C. – Clemson broke a 2-2 tie with three runs in the fifth inning in its 6-3 victory over No. 18 College of Charleston at Doug Kingsmore Stadium on Wednesday night. The Tigers improved to 25-24, while the Cougars dropped to 35-10. It was the first meeting between the two since 2012.

Clemson scored single runs in the third and fourth innings, then Bradley Jones belted a two-run homer in the top of the fifth inning to tie the score. The Tigers responded with three runs in the bottom of the fifth inning. Robert Jolly’s leadoff double started the uprising in the fifth inning. The Cougars loaded the bases with no outs in the seventh inning, but Alex Bostic entered the game and retired the next three batters without allowing a run.

Clate Schmidt (2-3) earned the win in a starting role by allowing four hits, two runs and one walk with four strikeouts in 5.0 innings pitched. Taylor Vetzel pitched the final 0.2 innings to record his second save of the season. Eric Bauer (3-3) suffered the loss, as he gave up three runs on four hits in 0.1 innings pitched.

“They are a good ballclub,” said head coach Jack Leggett of the Cougars. “They have been playing exceptionally well all year long. We expected a tough ballgame, and they gave it to us. It was nice to get another win against a good team, and hopefully we can carry that on into the weekend.

“We pitched really well. Clate went out there and gave us five good innings. Alex Bostic came in with the bases loaded and nobody out, and did a tremendous job getting out of that. Then he gave us some good innings after that. Bostic was the story of the night.”

The Tigers conclude their regular-season home schedule when they host Georgia Southern in a three-game series starting Friday at 6:30 p.m. Youth 12 and under receive free admission by wearing a camp or little league shirt. Also, join us for an exciting 10-minute postgame fireworks show.