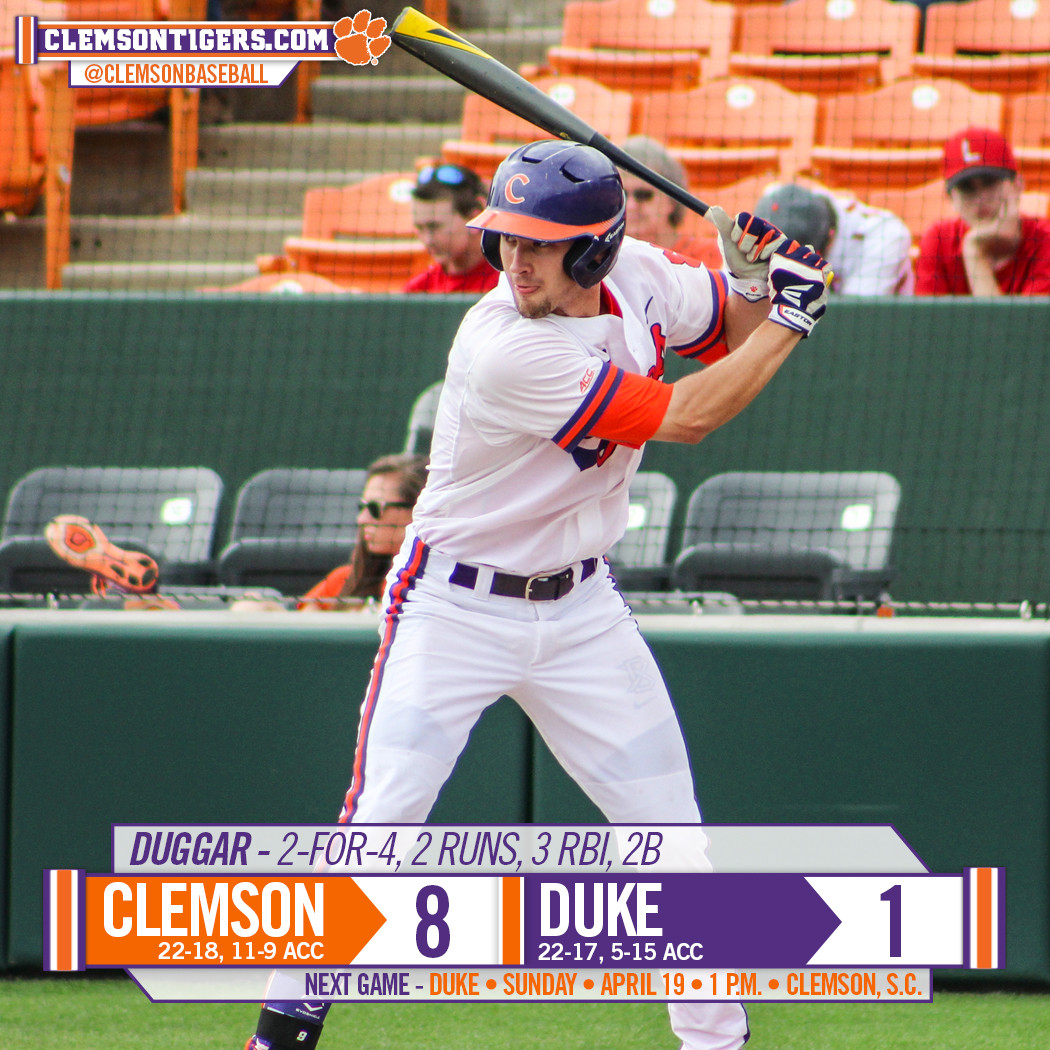 CLEMSON, S.C. – Zack Erwin allowed just one run on five hits in 8.2 innings pitched in Clemson’s 8-1 victory over Duke in the second game of a doubleheader at Doug Kingsmore Stadium on Saturday afternoon. The Tigers, who swept the doubleheader and took a 2-0 lead in the series, improved to 22-18 overall and 11-9 in the ACC. The Blue Devils dropped to 22-17 overall and 5-15 in ACC play.

Erwin (3-3) earned the win by allowing just five hits, one run and two walks with nine strikeouts. Duke starter Andrew Istler (3-3) suffered the loss, as he gave up seven runs on nine hits in 3.2 innings pitched.

After Duke scored a run in the top of the first inning, Clemson answered with two runs in the bottom of the first inning. Then the Tigers erupted for five runs in the fourth inning, highlighted by a two-out, three-run double by Steven Duggar followed by a run-scoring double by Tyler Krieger. Reed Rohlman (13) and Chris Okey (10) upped their hitting streaks as well.

“We played well today,” said Head Coach Jack Leggett. “(Matthew) Crownover did his thing. Erwin was outstanding, maybe the best I have ever seen him. He really pitched well, threw strikes and worked ahead in the count. His stuff was crisp, his fastball had some life to it and we played good defense behind him and had a few big innings.

“It was really good to answer their score in the first inning and in the fourth inning we scored five runs, including a base-clearing hit from Steven Duggar, and manufactured some runs with two outs.”

The series concludes Sunday at 1 p.m. Fans can purchase two reserved adult and two reserved youth tickets for only $20. It is also Sunday Funday, with family-friendly activities during the game and throughout Doug Kingsmore Stadium.