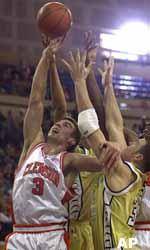 The two teams are going in different directions. Georgia Tech has won three Atlantic Coast Conference games in a row, while Clemson has lost seven straight ACC games and is back in the league basement after starting 2-1.

Clemson (11-12, 2-8) was led by Jamar McKnight’s 15 points. Edward Scott dished out nine assists, but shot just 2-of-8 from the field and finished with five points.

The Yellow Jackets led 15-13 with ten minutes left in the first half before scoring 14 straight points in just over two minutes to take a 29-13 lead.

The burst started with an Akins’ 3-pointer, followed by Ed Nelson’s three-point play. Elder then hit back-to-back 3s and finished the run with a dunk off his own steal.

Georgia Tech shot 9-of-15 from behind the arc in the first half, while Clemson shot just 2-of-10 from long range.

The Yellow Jackets led 44-24 at the break, but struggled in the second half, going 8{ minutes without hitting a field goal. Clemson shaved just seven points off the lead during that stretch and trailed 56-36 when Nelson’s free-throw line jumper rattled in with 8:00 left.

The 50 points were the fewest the Tigers have scored all season.

Clemson’s starting backcourt of Edward Scott didn’t score until Scott’s short jumper with 16:27 left in the game. The pair missed 11 shots in the first half and went 3-of-17 for the game.