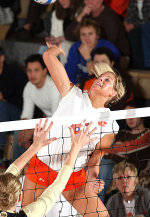 CLEMSON, SC – Junior Jeannette Abbott tallied 20 kills as the Clemson volleyball team (23-3, 16-1) cruised to a 3-0 victory over Wake Forest on Thursday night at Jervey Gym. The win sets up an ACC clash between the first-place Tigers and #14 Duke on Friday night, while it marked the most league wins in a single season for the Clemson program.

Abbott was one of three Tiger hitters to post double figures in kills, as Danielle Hepburn and Lia Proctor totaled 12 and 10, respectively. Setter Kelsey Murphy recorded 47 kills in the three-game match while guiding the Clemson offense to a .352 team hitting percentage.

“I was really pleased with how well we passed,” Clemson Head Coach Jolene Jordan Hoover. “I think that was the key tonight because we were able to move the ball around quite a bit and involve the middle.”

The Tigers scored first in the opening game and held the lead for the entire set. Abbott posted four early kills as Clemson jumped out to a 13-6 advantage. They then extended the lead to nine at 20-11 before Wake Forest posted six of the next eight points to narrow the gap to five. The Tigers survived another late rally by the Deacs that cut their lead to just three at 28-25 and Clemson secured the 30-25 victory.

Wake Forest struck first in the second game, but the Tigers quickly rebounded with a pair of four-point runs to go up 11-7. Although Clemson led for the rest of the way, the score was tight throughout much of the frame. Leading by four at 20-16, the Tigers went on an 8-3 run that included three kills by Abbott. A White kill posted Wake Forest’s 20th point, while Mansfield responded with an attack for Clemson’s game-point. Hepburn then claimed the win and a 2-0 lead for the Tigers following another White kill.

The third game was the closest affair of the match with six tie scores and two lead changes. Back-to-back aces by Mansfield put Clemson on top at 10-8 and the Deacs played catch-up for the remainder of the game. Wake Forest rallied for four points to narrow the Tiger lead to 23-20, but Hepburn and Proctor posted kills for Clemson’s 29th and 30th points to clinch their 23rd victory of the season.