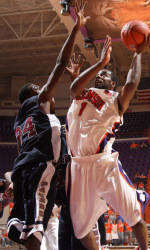 Tigers Down TCU at Charleston Classic, Advance to Championship Game

Charleston, SC – Clemson advanced to the championship game of the inaugural Charleston Classic after defeating TCU by a score of 70-58 on Saturday at the Carolina First Arena. Senior captain K.C. Rivers scored 18 points, while Terrence Oglesby added 14 for Oliver Purnell’s club that is in search of its third regular season tournament crown in the last four years. The Tigers will take on Temple on Sunday for the championship at 4:00 PM.

Rivers hit 8-16 shots from the field, including a pair of long-range baskets that moved him into third place on the school’s all-time three-point goals list. Oglesby hit 5-10 from the field, including 2-5 on three-point attempts. Trevor Booker, who was a dominant force for the Tigers in the first game of the tournament against Hofstra, led the way defensively with 12 rebounds and seven blocked shots.

The first half featured sloppy play by both teams, as neither could get out to much of an advantage on the scoreboard. TCU grabbed its biggest lead of the game at 13-9 just over six minutes into the contest, but Clemson quickly answered with a 6-0 run ending with a jumper by Demontez Stitt. Clemson’s largest lead of the opening period was also just four points, after Rivers hit the first two baskets of the game. The first half featured seven ties, but Clemson was able to take a two-point lead into half following a key three-point basket by reserve David Potter.

In the second half, a three-pointer right away by Rivers extended Clemson’s lead to five. The teams traded baskets over the next three minutes before Clemson jumped ahead 41-34 on a dunk by Rivers off a backdoor feed from Potter. Backup point guard Andre Young gave the Tigers their first double-digit lead of the contest at 46-36 after hitting the first three-pointer of his collegiate career.