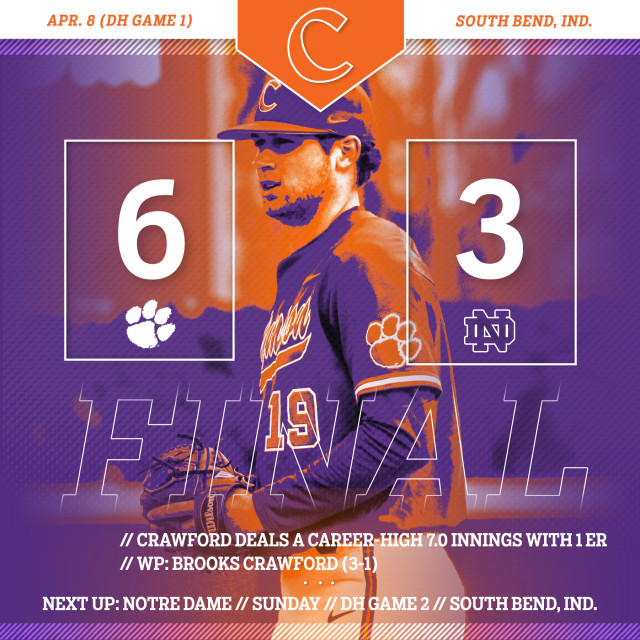 NOTRE DAME, IND. – Kier Meredith and Kyle Wilkie both hit their first career home runs and Jordan Greene hit his third homer in the last four games to lead No. 6 Clemson to a 6-3 victory over Notre Dame in the first game of a doubleheader at Frank Eck Stadium on Sunday. The Tigers, who evened the series 1-1, improved to 24-7 overall and 9-5 in the ACC. The Fighting Irish fell to 13-17 overall and 5-9 in ACC play.

In the third inning, Greene and Meredith hit solo homers on consecutive pitches. It was Greene’s third home run of the season. Greene added to his RBI total with a two-run single in the fourth inning. Drew Wharton ripped a two-out, run-scoring single in the fifth inning, then Wilkie belted a solo long ball in the sixth inning. Bryce Gray laced a run-scoring double in the seventh inning to score Eric Gilgenbach.

Tiger starter Brooks Crawford (3-1) earned the win in a career-long 7.0 innings pitched. The junior righthander allowed just five hits, one run and one walk with one strikeout to register his third career victory against the Fighting Irish. Notre Dame starter Tommy Sheehan (1-3) suffered the loss, as he gave up six hits, six runs and three walks with three strikeouts in 6.0 innings pitched.

The series concludes with the second game of the doubleheader at approximately 2:50 p.m., on ACC Network Extra.