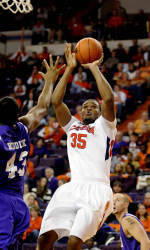 The Tigers (8-2) had a week off since beating rival South Carolina on Dec. 6 and that freshness showed throughout against the Paladins (5-3). Booker hit eight of his first nine shots as Clemson led 43-26 at the break.

Booker left the game for good after breaking up a midcourt pass and taking a feed from Andre Young for a crowd-pleasing jam with 5:44 left.

The Tigers turned up the defensive pressure after the break, holding Furman to a season low in points and extending the Southern Conference school’s run of futility. The Paladins last beat Clemson on Jan. 25, 1978, when they were in the midst of six NCAA appearances between 1971-1980.