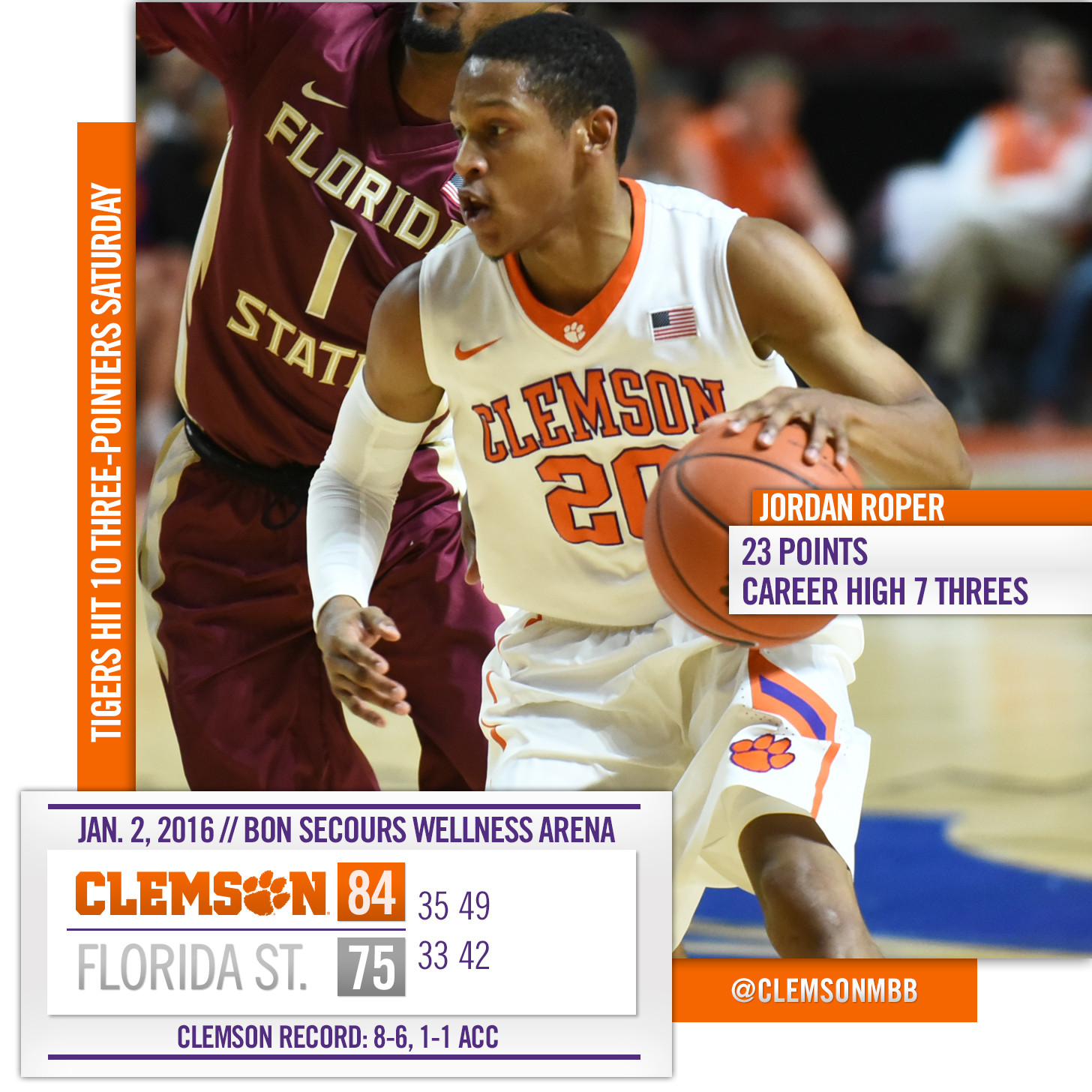 GREENVILLE, S.C. — Jordan Roper hit a career-high seven three-point goals to lead Clemson to its first ACC win of the season, 84-75 over Florida State in the Tigers’ home opener at Bon Secours Wellness Arena. Clemson moved to 8-6 on the season, 1-1 in league play. FSU fell to 10-3 overall, 0-1 in the ACC.

Roper posted 23 points to lead the Tigers to an impressive performance Saturday. Clemson’s win was the program’s first at home against Florida State since 2011-12, Brad Brownell’s second season as head coach. Roper was 7-10 from three, eclipsing his previous best of six made threes set last season against Boston College. Clemson also got 15 points from Avry Holmes, a career-high 14 from Sidy Djitte, and 11 from Donte Grantham.

The Tigers shot 45 percent for the game, but made 10 three-point goals. Clemson was also solid at the free throw line, converting a season-best 24 on 33 attempts. Clemson finished the game with a positive 15-9 assist-turnover ratio, while outrebounding a tall Seminoles team 42-31.

Clemson jumped out to a 12-2 lead behind an efficient effort offensively. Grantham found an early three-ball, and assisted on two other jumpers. He finished with a game-high seven helpers. FSU answered with a 14-5 run punctuated by a trifecta from Devon Bookert. He helped give the ‘Noles their first lead with another wing three, followed by a three-point play from Xavier Rathan-Mayes that gave FSU a 25-23 edge.

Roper’s big half continued, as the senior drained consecutive three-pointers sandwiched by a Nnoko jam to give the Tigers a 31-28 cushion. FSU pulled closer after Bookert’s third triple of the half, but Clemson held a 35-33 lead at intermission.

Clemson got into a back and forth scoring affair in the second half with the ‘Noles. FSU heated up midway through the period, hitting six of eight shots at one point to pull within two at 52-50. Still up four, Bookert converted a four-point play to knot the game at 54 going into the under-eight timeout.

Djitte, who provided great energy throughout the game, made a layup to push Clemson’s edge to 60-56 and then dove on the ground to steal the ensuing entry pass from the Seminoles with 5:50 to play. Roper and Holmes then delivered consecutive three balls, pushing the edge to 66-59. FSU never threatened again. Bookert finished with 21 points, making 6-9 from long distance, while freshman Malik Beasley led the way with 23.

The Tigers return to action Tuesday at Syracuse. The two teams square off in the Carrier Dome at 8 p.m.