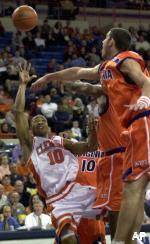 Babalola got to the line by battling for a rebound with Virginia’s Elton Brown after Edward Scott missed a layup. The possession arrow was pointing to the Cavaliers, but the referee whistled a foul on Brown.

Babalola, a 68 percent free throw shooter for the year, calmly swished both shots, causing a roar so loud it shook the newly replaced roof at Littlejohn Coliseum.

Virginia (10-5, 1-3 Atlantic Coast Conference) was out of time-outs and had to push the ball up the floor. Keith Jenifer got a good look at a 3-pointer, but it bounced off the rim as the final second ticked away.

It was the first Atlantic Coast Conference win for Clemson (11-2, 1-2) at its recently renovated arena.

Virginia’s Todd Billet led all scorers with 25 points, going 7-for-11 on 3-pointers, including a 3 that gave the Cavilers a 77-76 lead with 33 seconds to go as Babalola guarded him.

But Clemson denied Billet the ball on the Cavaliers’ final possession.

Scott, Clemson’s leading scorer in all but two games this season, was sick and only scored 13 points, and just one point in the second half. But backcourt mate Chey Christie picked up the slack leading the Tigers with 16 points.

And it was Christie’s play that kept Clemson in it at the end. He hit a driving layup to tie the game at 74 with 1:34 left, then took the ball at the top of the key and drove into the lane, dropping in a hanging jumper from about 5 feet out to put the Tigers up 76-74 with 49 seconds to go.

Virginia’s biggest lead was nine with 6:52 left in the first half, but the Tigers scored on eight straight possessions to get back into the game.

Brown had 16 points. Travis Watson scored 12 points and had eight rebounds and Nick Vander Laan added 10 points for the Cavaliers, who have yet to win an ACC game on the road.

The Tigers needed a win Saturday to build momentum going into a tough stretch that starts with a trip Tuesday to Florida State, where they have lost four straight, and then home games against Maryland and Wake Forest, both in the top half of the ACC.

Virginia outrebounded Clemson 28 to 27. It is only the second time the Tigers have been beaten on the boards this season.