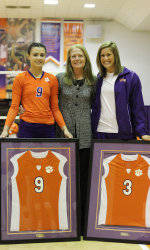 Tigers Down #22 Miami in Five

Clemson hit .269 as a team, and used ten team blocks to hold Miami to a .201 hitting percentage. The Tigers’ 76 kills are the most kills as a team since 2007. Sandra Adeleye led the Tigers with a career-high 27 kills (.426 hitting percentage). The junior middle hitter also recorded four blocks and season-high-tying three digs.

Setter Hannah Brenner was stellar for Clemson, dishing out a career-high 68 assists and a career-high 18 digs. Brenner also recorded four kills for the Tigers. Those 68 assists are second all-time in Clemson history for assists in a single match. Mo Simmons also set a season-high in solo blocks with two. Kristin Faust came off the bench for Clemson and added eight kills and 15 digs.

In the first set, Clemson registered a potent 19 kills, but were hurt with eight attack errors, which made the difference in the tight set. Miami hit .308 and spread the ball out, finding four players for three kills. Clemson, meanwhile, also used a three-pronged attack, with Adeleye and Yaz tallying six kills apiece and Simmons putting down five. Simmons lead all players with five digs in the set. Brenner also recorded 18 assists for the Tigers.

It was all Clemson in the second set, where the Tigers hit .235 and held the Hurricanes to a .093 hitting percentage. With the score tied at 8, Clemson went on a 17-8 run to close out the set. Adeleye led all hitters with four kills, while Brenner recorded 11 assists.

The third set saw both teams hit at an impressive clip, with Miami recording 18 kills and Clemson recording 17. With the set tied at 20, Miami went on a 5-2 run to take the set 25-22. Brenner recorded double-digit assists for the third straight set, notching 15. Natalie Patzin led all players with eight digs.

The Tigers used solid defense and timely hitting to take the fourth set from the Hurricanes, 25-23. Down 8-3 early, the Tigers battled back and went on a 10-4 run to take a 13-12 lead. Then, with the score tied at 17, Clemson used three kills from Adeleye to take a 21-17 lead. The Tigers then held off a late Miami rally to force set 5. Adeleye put down nine of her 27 kills in set four and Brenner again recorded double-digit assists with 14.

In the fifth set, the Tigers hit a blistering .385 and, with the help of three team blocks, held the Hurricanes to just a .107 hitting percentage. With the score tied at 10, freshman Kristin Faust served four in a row, and the Tigers took the set, 15-10, thanks to four straight kills from Adeleye and Yaz. Brenner recorded double-digit assists with 10. She also led all Tigers with 5 digs, while Yaz and Adeleye recorded four kills each in set five.

Clemson plays Wednesday at Georgia Tech to close out the regular season, and will await word on a possible NCAA Tournament bid. The 64-team bracket will be announced on Nov. 27 on ESPNU at 7:00 PM.