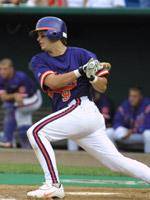 Every Tiger had at least one hit and Tyler Lumsden tied a career high with 11 strikeouts in the #13 Tigers’ 8-4 victory over #2 Florida State Friday evening in front of 4,016 fans at Dick Howser Stadium in Tallahassee, FL. The win broke the Seminoles’ nine-game winning streak in the series and also was just Florida State’s second loss in its last 36 ACC home contests. The Seminoles also lost just their second game in 27 home games this year.

The Tigers improved to 25-7 overall, 4-3 in ACC play, while Florida State fell to 31-6, 9-4 in the ACC. Lumsden improved to 7-0 by pitching 7.0 innings and allowing four runs, six hits, and three walks while striking out 11. The strikeout mark was the same total he had in the win against #6 South Carolina on March 1. Clemson also out-hit the Seminoles 14-6, led by Brad McCann and David Slevin, who each had three hits.

Clemson got on the board first in the third inning. Steve Pyzik’s one out single got things started. After Slevin’s pop up for out #2, Zane Green grounded a slow ball to second baseman Chris Hart, who could not come up with the ball. Russell Triplett followed with a double off the end of his bat then landed just over the first baseman’s head. Pyzik scored on the play, as did Green when Jerrod Brown’s throw to second base went awry.

The Seminoles responded in the bottom of the third with a run. Matt Sauls led off with a walk and stole second. Then with two outs, Tony Richie lined a curveball for his 17th double of the year to left-center, plating Sauls.

Pyzik came through once again in fourth inning to plate a run. On a full count, the senior catcher lined a ball to Brown at first base. Brown could not make the tough play, which was ruled an error. Jeff Hourigan scored on the play after he led off the inning with a double to right center.

Pyzik continued his timely hitting in the sixth inning. Kyle Frank singled off the right-field wall and advanced to third on a throwing error by shortstop Stephen Drew. Frank entered the at bat 2-for-45 in the 14th game of his career against the Seminoles. Then Pyzik laced a two-run triple down the left-field line to plate two runs. Pyzik was making just his fifth start of the year and had not even gotten a hit since March 24 (Wofford). Slevin followed with a single to plate Pyzik when he lined a 1-2 curveball passed a drawn-in infield, giving Clemson a 6-1 lead. Clemson added two more runs when McCann lined a single off the pitcher with the bases loaded. Johnson had also slapped a hit off the pitcher the previous batter.

The Seminoles cut into the Tiger lead in the sixth inning with two runs on a Richie opposite-field homer. Eddy Martinez-Esteve led off with a single to left field on an 0-2 pitch.

Another homer by Florida State cut further into the Tiger lead, as Martinez-Esteve hit a full-count, leadoff homer to right-center in the eighth inning after being down 0-2 in the count.

The two teams will meet again in game two Saturday at 7:00 PM at Dick Howser Stadium. The game will be televised live by Fox Sports Net South.