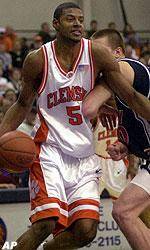 ANDERSON, S.C. (AP) – Edward Scott had 16 points and 11 assists as Clemson kept up its best start in seven seasons with a 78-65 victory over Liberty on Saturday.

Sharrod Ford added 14 points for Clemson at the Civic Center of Anderson. Ray Henderson and Chey Christie added 11 points apiece for the Tigers.

But the Flames had no answers for Clemson’s inside game, which won the rebounding battle 41-20. Henderson led the way with seven rebounds, while Scott, Ford and Chris Hobbs had six each.

The Tigers can go 4-0 against members of the Big South Conference – they’ve previously defeated Winthrop and High Point – this year when they meet Coastal Carolina on Tuesday.

Scott’s 11 assists gave him 486 for his career and moved him past Derrick Johnson into third all-time behind Grayson Marshall and Terrell McIntyre. While Scott has a strong chance to catch McIntyre’s second-place total of 577 this season, Marshall’s mark of 857 is likely out of reach.

The Flames quickly fell behind 18-5 on Henderson’s foul shot with 10:27 to go before halftime. They could not catch up.

It was not the soundest game Clemson played. The Tigers came in averaging about 11 turnovers a game, but hit that mark in the first half.

However, Liberty shot just 38 percent (22-of-58) for the game against Clemson’s zone.