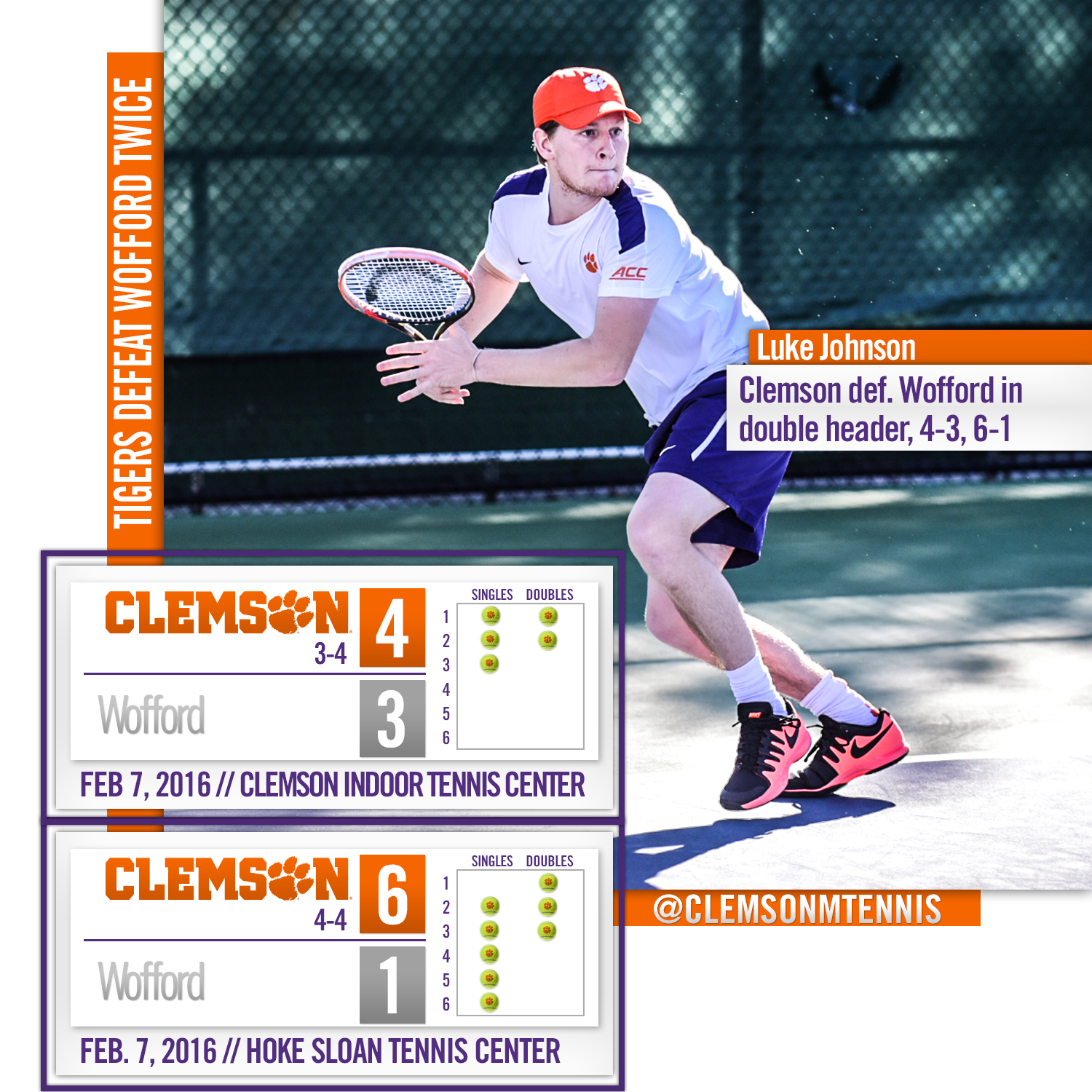 CLEMSON, S.C. – Clemson defeated Wofford twice on Sunday afternoon at the Hoke Sloan Tennis Center. The Tigers took the first match of the day, 4-3. The second match was clinched after a win on court five resulting in a 6-1 win by the Tigers. With the two wins on the day Clemson brings its record to 4-4 on the season, winning three matches in a row.

“It was a really good day for us, dealing with some adversity the last 24 hours. I thought the guys competed today. The one thing about a solid team, you don’t always rely on the same group of people to pull you through on the courts,” said Head Coach Chuck McCuen. “From our first match to our second match, we had role reversals where some people had to step up in that 4-3 win. Other players in the second match stepped up, picking up the slack. Seeing that was rewarding from a coaching standpoint. We preach all the time that it is not about any individual players that win; it is a team that wins, and today the Clemson men’s tennis team won those two matches.”

In the first match of the day, the Tigers clinched the doubles point over Wofford, winning on courts one and two. Alex Favrot and Luke Johnson set the pace, cruising to a 6-2 win over the Terriers on court one. Wofford then won 6-2 on court three. Austin Ansari and Arturo Pinazo clinched the point with a 6-4 win at number two. All three doubles combinations today were first time combinations for the Tigers.

In singles play, Clemson continued their strong play, taking a quick 2-0 lead with wins on courts three and two. Johnson started the winning in two sets 6-3, 6-2 at number three, and Sanon continued with a straight-set win 6-3, 6-2 at number two singles. Favrot then clinched the match, also winning in two sets 6-2, 7-5, on court one. The Tigers then dropped a point to Wofford on courts five and six.

In the nightcap, Clemson swept the doubles matches, clinching the doubles point two matches in a row against Wofford. Brent Lett and Daffra Sanon won on court three, before and Austin Ansari and Arturo Pinazo overpowered the Terriers, 6-1, at number two to clinch the point. The doubles point sweep came when Favrot and Johnson won on court one, where they defeated their counterparts 7-5.

Johnson breezed through at number three singles for the Tigers’ first point, winning 6-2, 6-1. Brent Lett also won straightforwardly 6-4, 6-1. Alex Favrot fell on court one, before Ansari downed his Wofford opponent on court five, 7-6, 6-3 to clinch the match. Sanon and Pinazo both battled from behind to win in three sets propelling the Tigers to a 6-1 victory over the Terriers.

Clemson returns to the courts next Sunday when the Tigers play host to Auburn and Garner Webb. The Tigers take on Auburn at 11 a.m. and Gardner Webb at 5 p.m. Pending weather the matches will be played at Hoke Sloan Tennis Center.