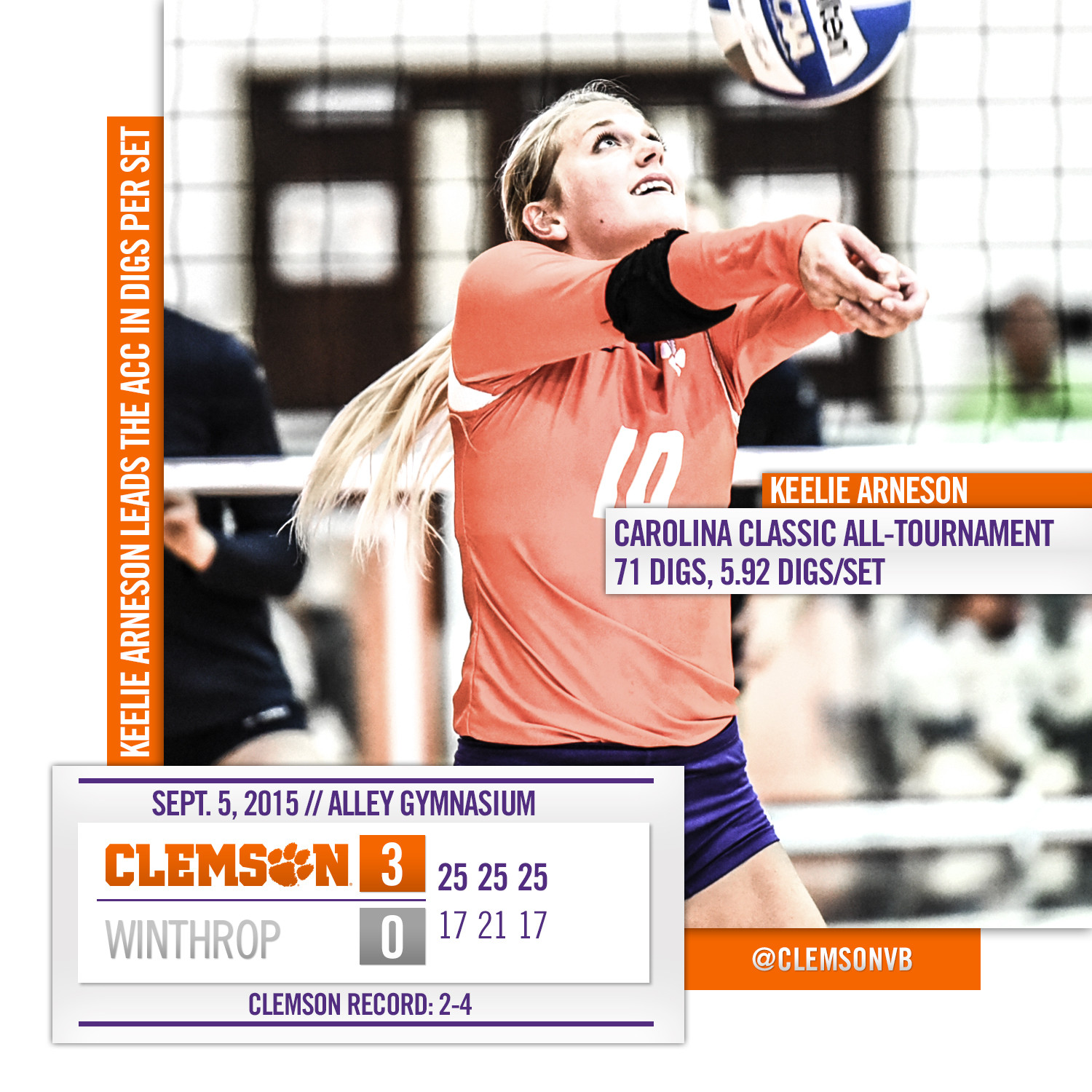 Keelie Arneson was Clemson’s honoree on the Carolina Classic All-Tournament Team. The transfer from Northwestern State bolstered the back line with 71 digs on the weekend as Clemson’s libero. She tallied 21 digs against South Carolina, 31 at Furman and 19 against Winthrop. She now has an ACC best, 113 digs and 5.65 digs per set average.

Clemson did as it pleased against Winthrop with Leah Perri leading the Tigers with 10 kills on 26 swings for a .308 hitting percentage. Kailey Harvell was next in line with nine kills. Harvell led Clemson against Furman with 16 kills earlier in the day while Perri was not far behind with 14.

However, the headline of the Winthrop math was the excellent first ball passing that opened the door for Kate Federico to flourish at the setter position. 61 digs in three sets assisted Federico in her 28-assist effort and her .364 conversion rate on her sets. She was also able to be aggressive as the Eagles had no answer for her trickery, leading to eight kills on 11 swings for a .636 hitting percentage. Federico added nine digs and four block assists as well.

Against Furman, Federico tallied 39 assists and 11 digs. She now has 203 assists on the season, averaging 9.23 assists per set.

“I was really pleased with how we did the little things well,” said head coach Hugh Hernesman. “We did a lot of the things that don’t always show up in the box score but are so important in winning matches.”

“Lou did a great job of providing a spark when we really needed it towards the end of the second set and really, all weekend long. She had some real good serves that took opposing teams out of system and did a nice job handling their offense. Sydney was really strong in a serve receive role, specifically in the Winthrop match.”

“They each played big roles for us that a lot of times may go unnoticed outside of our players and staff.”

Moseley logged seven digs in the Winthrop match while Davis picked up three service aces on the day.

Middles, Sofia Hruby and Megan McGinley were strong on the block against Furman as they each were credited with five blocks.

DeJhana Cotton joined Hruby in the Winthrop match and they each enjoyed success attacking and blocking. Cotton was credited with a .545 hitting percentage due to her seven kills on 11 attempts. Hruby was good for five kills in the match and three blocks while Cotton tallied four.

The Tigers are back in Clemson, South Carolina next weekend for the Clemson Classic beginning on Friday, September 11 against East Tennessee State.