CHAPEL HILL, N.C. — Making history at the Dean E. Smith Center, the Clemson University men’s basketball team put an end to a longstanding streak on Saturday, defeating the North Carolina Tar Heels on the road for the first time in program history. Taking part in their 60th all-time meeting with North Carolina in Chapel Hill, Clemson produced a fervent comeback late in the second half and won 79-76 in overtime. As a result, Clemson Head Coach Brad Brownell picked up his 177th win as the leader of the Tigers, tying Cliff Ellis for the most all-time wins by a Clemson head coach.

The streak is over! 👀🐅@Coach_Brownell joined @TheAndyKatz from the bus after @ClemsonMBB won at UNC for the first time in program history! #ClemsonGRIT pic.twitter.com/LRKi9mF9UL

Both teams let it fly from beyond the arc on the day. Clemson (8-7, 2-3) knocked down 12-of-31 3-pointers on the day, and North Carolina (8-8, 1-4) went 6-of-26 from deep. The Tigers shot 43.3 percent from the floor while the Tar Heels went 42.4 percent from the field in the evenly matched affair. Each team pulled down 39 rebounds, and Clemson shot 69.2 from the free throw line as compared to North Carolina’s 70-percent shooting mark at the charity stripe. Turnovers proved to be critical down the stretch, and the Tigers notched 14 points off 11 Tar Heel turnovers.

Aamir Simms came up clutch for Clemson in the thriller, with the big man scoring a team-high 20 points to go along with his eight rebounds and six assists. Simms also showed out on defense, recording four blocks and three steals, and he sank three treys, as well. Tevin Mack, who scored 10 of his 17 points in the first half, also drained a trio of 3-balls. John Newman III connected on two 3-point shots en route to collecting a career-best 17 points, six boards and a career-best four dimes. Brandon Robinson led the Tar Heels with a career-high 27 points, and North Carolina’s Armando Bacot tallied 21 points.

Clemson manufactured an epic late-game comeback to force overtime and, after never sporting a lead in regulation, outscored North Carolina 9-6 in the extra period. The Tar Heels and the Tigers both went 4-for-12 from behind the arc in the first half. Clemson’s Al-Amir Dawes sank a desperation 3-pointer to beat the buzzer at the end of the first half. North Carolina led 39-29 at the intermission and continued to control the pace of the game for the majority of the second half.

However, during crunch time, Clemson applied defensive pressure and pulled off a remarkable comeback in the final two minutes of the second half. The Tigers went on a 12-2 run after falling down 68-58 at the 2:08 mark, as Clemson forced three turnovers in the last two minutes of regulation. Nine of those 12 points were scored by Simms, who made a game-tying 3-pointer with 12 seconds left. Clemson proceeded to excel in the paint in overtime, with backdoor cuts and wide-open layups leading to the Tigers collecting the historic victory. Robinson missed a potential game-tying 3-ball as the final buzzer sounded in overtime, and Clemson secured its long-awaited triumph.

The Tigers will return home to Littlejohn Coliseum for their next outing. Clemson is slated to square off with another team from the Research Triangle on Tuesday, Jan. 14, with the No. 2 Duke Blue Devils (14-1, 4-0) coming to town for an ACC showdown. Set to tip off at 7 p.m., the game will air on ESPN. Tickets are available at ClemsonTigers.com.

“That was a remarkable win. I’m incredibly proud of our players. North Carolina played hard. We made a couple of runs, but they battled back every time. I thought we made some outstanding plays at the end of the game.”

On the keys to victory:

That was a great execution of the 3-point shot by Aamir [Simms] to tie it at the end of regulation. In overtime, we made a couple of backdoor cuts that worked out. I thought our team played incredibly well.”

On ending the winless streak in Chapel Hill:

“We’re certainly glad that it’s over. To change the narrative is a good thing. You’ve got to be really proud of this team for the way they fought, didn’t give in and made big shots and big plays.” 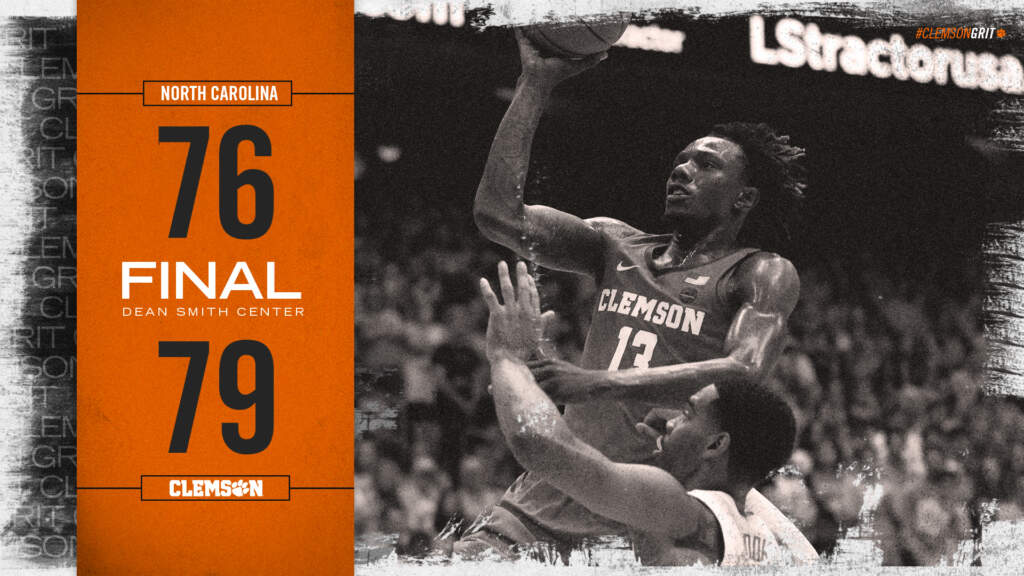