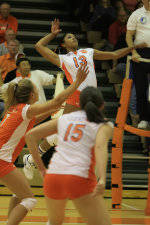 The Tigers’ home finale will be on Saturday night as they play host to Boston College. Clemson will honor seniors Danielle Hepburn prior to the 6:00 pm match.

Hepburn’s 18 kills added to her ACC-leading kills per set average while the native of Miami, FL also hit a .382 clip with five total blocks against the Terps. With 16 kills and 11 digs, Proctor extended her double-double streak to five straight and posted her 10th of the season.

Didem Ege has now recorded double figures in digs for 43 consecutive matches, dating back to Oct. 30, 2007.

After a tight beginning to the first set, the Tigers gained separation with a four-point run that put them on top 14-10. They then scored five straight points, including a pair of kills by Cansu Ozdemir, for the 21-13 advantage. A Proctor kill gave Clemson a 23-16 lead and the junior from Inman, SC recorded a solo block for point #24. A Maryland attack error sealed the 25-16 win for the Tigers.

The second set played out in a similar fashion with the teams within two points of each other for the first half of the frame. A pair of three-point rallies put Clemson ahead by five, while back-to-back kills by Jeannette Abbott and a pair of blocks for Ozdemir and Lisa Jedlicka widened the margin to 21-13. Hepburn put a ball down to score the Tigers’ 24th point and then teamed with Murphy on a block to clinch the set.

Clemson led by an 18-13 margin late in the third set before the Terps went on an 11-5 run to take the lead. Lisa Scott recorded four kills during the stretch. With the Tigers facing set point, Murphy recorded a kill to knot the score. The teams traded points until Scott and Maryland setter Sharon Strizak combined for a block. Strizak then served an ace to force the fourth set.

The Terps came out strong in set four as well to take a 12-11 lead on the service of Michelle Kenning. Clemson then trailed 18-15 before rallying for a two-point advantage thanks to several Terp miscues. A block by Scott made it 20-19 in favor of the Tigers, and Clemson closed out the match on a 5-2 run for the 20th victory of the season.