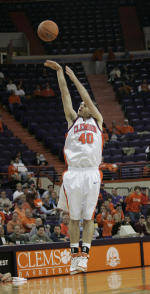 Guyanabo, Puerto Rico-Troy Mathis scored 15 points, all on three-point shots, to lead four reserves who scored in double figures in Clemson’s 101-60 victory over UPR-Mayaquez in the first round of the San Juan Shootout. The game was played at the Mario Morales Coliseum in Guyanabo, Puerto Rico.

Clemson will meet Holy Cross in the second round on Tuesday at noon eastern time. The Crusaders defeated UT-Chattanooga, 82-65 in the second game of the day at the San Juan Shootout. It will be just the second meeting in history between the two schools. Clemson defeated Holy Cross 67-49 in the Poinsettia Classic in Greenville, SC in December of 1971.

The 41-point margin was just the ninth game in Clemson history in which the Tigers won a game by at least 40 points away from home, the first since a 95-42 victory over Delaware State in Little Rock, Arkansas on December 29, 1987.

Clemson made a school record 16 three-point goals, including 15 by reserves as the Tigers improved to 9-0 for the season. It is Clemson’s best start since the 2002-03 season when Clemson also opened 9-0.

“It was good to get an easy win early in the day and concentrate on preparation for the second round game,” said Head Coach Oliver Purnell. “We were able to rest the starters, which is important when you are playing a game three consecutive days. We had good ball movement in the first half and shot the ball well the entire game. The only area that was disappointing was the amount of turnovers in the second half. But, we shot the ball well from the three-point line and that cures a lot of ills.

“It was good to see Troy Mathis shoot the ball like he did. He has been fighting a knee problem all year. Hopefully it won’t be sore tomorrow and he will be able to help us in the second and third rounds.”

Clemson’s bench scored 72 of the 101 points and shot 26 of 40 from the field, including 15-22 from behind the arc, which was a foot longer than normal due to the experimental rules used for the 2005 San Juan Shootout.

Mathis made 5-6 three-point goals and was 5-7 overall in leading the Tigers for the first time this year in just 15 minutes of play. He is the ninth different Tiger to lead or share in game scoring honors this year. He had scored just 15 points in the first eight games combined as the red-shirt freshman attempts to comeback from off season knee surgery.

Steve Allen also had a career scoring high. The red-shirt senior from Florida scored 11 points as he connected on 5-5 from the field. He also had six rebounds and a career high five blocked shots in just 17 minutes. Shawan Robinson made 4-4 three-point shots and scored 14 points in just 18 minutes, while Julius Powell had his second double figure game off the bench with 11.

It marked the first time in Clemson history that the Tigers had four double figure scorers off the bench and didn’t have a single starter score in double figures. The Tigers took a 28-14 lead early and Coach Oliver Purnell substituted early and often. Walk-on Matt Morris played a career high 13 minutes and scored nine points, as he was a perfect 3-3 on three-point shots.

Clemson took a 63-31 lead at intermission. It was the most points scored in a half by a Clemson team since Clemson scored 69 in the first half against Charleston Southern in Charleston on December 1, 1993.

Clemson held a comfortable lead the remainder of the game. Powell played the most minutes with 21 as 12 of the 13 Clemson players saw at least 12 minutes of action. Every Tiger scored including walk-on Jesse Yanotola, who scored his first points as a Clemson Tiger on a three-pointer at the buzzer. It gave Clemson a record 16 three-point goals for the game that started at 11:00 AM local time. The previous Clemson record was 15 made three-point goals on three occasions.

The only negative of the game was the turnover total as the Tigers committed a season high 25 miscues. Clemson’s defense had 11 blocked shots and 11 steals. Those numbers did not hurt Clemson’s top 20 national ranking in both blocked shots and steals.

Clemson shot 61.7 percent from the field for the game, including 57.1 percent on three-point shots. The overall field goal percentage was the best by a Clemson team since the Tigers made 63.8 percent against Butler in the 1999 NIT at Clemson. It was the top field goal percentage by a Clemson team away from home since November 11, 1997 when the Tigers shot 67.6 percent against Iona in the Top of the World Classic in Fairbanks, Alaska.