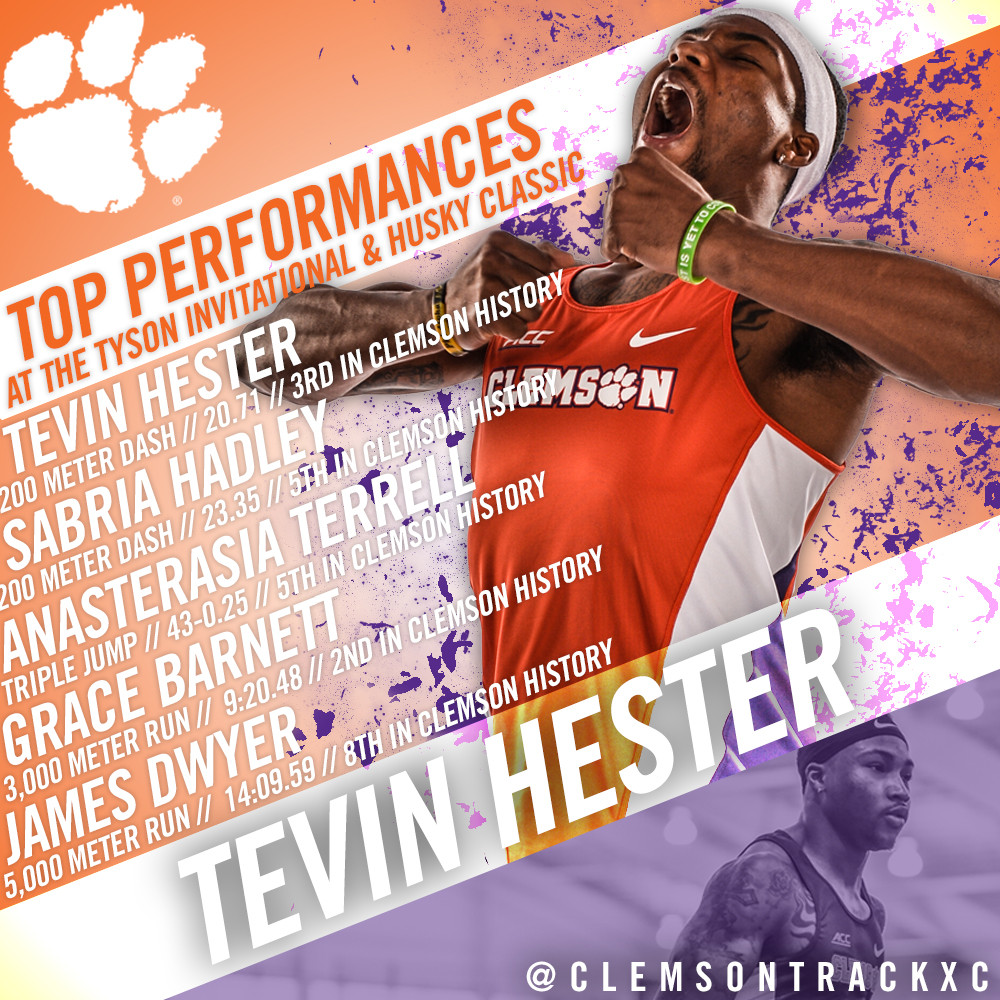 FAYETTEVILLE, Ark. – Among some of the toughest competition in the country, the Tigers showed they belong as five Clemson student-athletes rewrote program history. Tevin Hester led the way at the Tyson Invitational while Grace Barnett just missed her second record in as many weeks in Washington at the Husky Classic.

Hester dropped the seventh fastest time in the country when he crossed the finish line at the 20.71 mark in the 200 meter dash. The third place effort is also the third fastest time in program history.

The performance came immediately after Sabria Hadley had finished her 200 meter dash in 23.35. Her time places her fifth in Clemson history and it currently stands as the 13th fastest time in the country. Behind her, Malayshia George also ran the best time of her career, clocking in at 24.26.

In the field, Anasterasia Terrell turned in the best jump of her career with a distance of 43-0.25 in the triple jump. The sixth place leap moves her up to fifth in program history as well and it is the 10th best jump in the country.

In Seattle, Barnett ran the second fastest 3,000 meter run time ever by a Tiger and it was just five seconds off of the program record. The redshirt sophomore clocked in at 9:20.48 just a week after she claimed the school record in the mile a week ago. Barnett’s time was a 29-second personal best in the event as she previously was ranked 10th on Clemson’s all-time list with a time of 9:49.62. The current record in the indoor 3K was ran back in 1987 by Ute Jamrozy when she finished the event in 9:15.04.

Last night, James Dwyer also etched his name into Clemson’s record book in the 5,000 meter run. His time of 14:09.59 places him eighth on Clemson’s all-time list.

Next week, Clemson will head to South Bend, Indiana for the Notre Dame Invitational. The meet marks the final test for the Tigers prior to the ACC Championships set in Boston, Massachusetts on February 25-27.