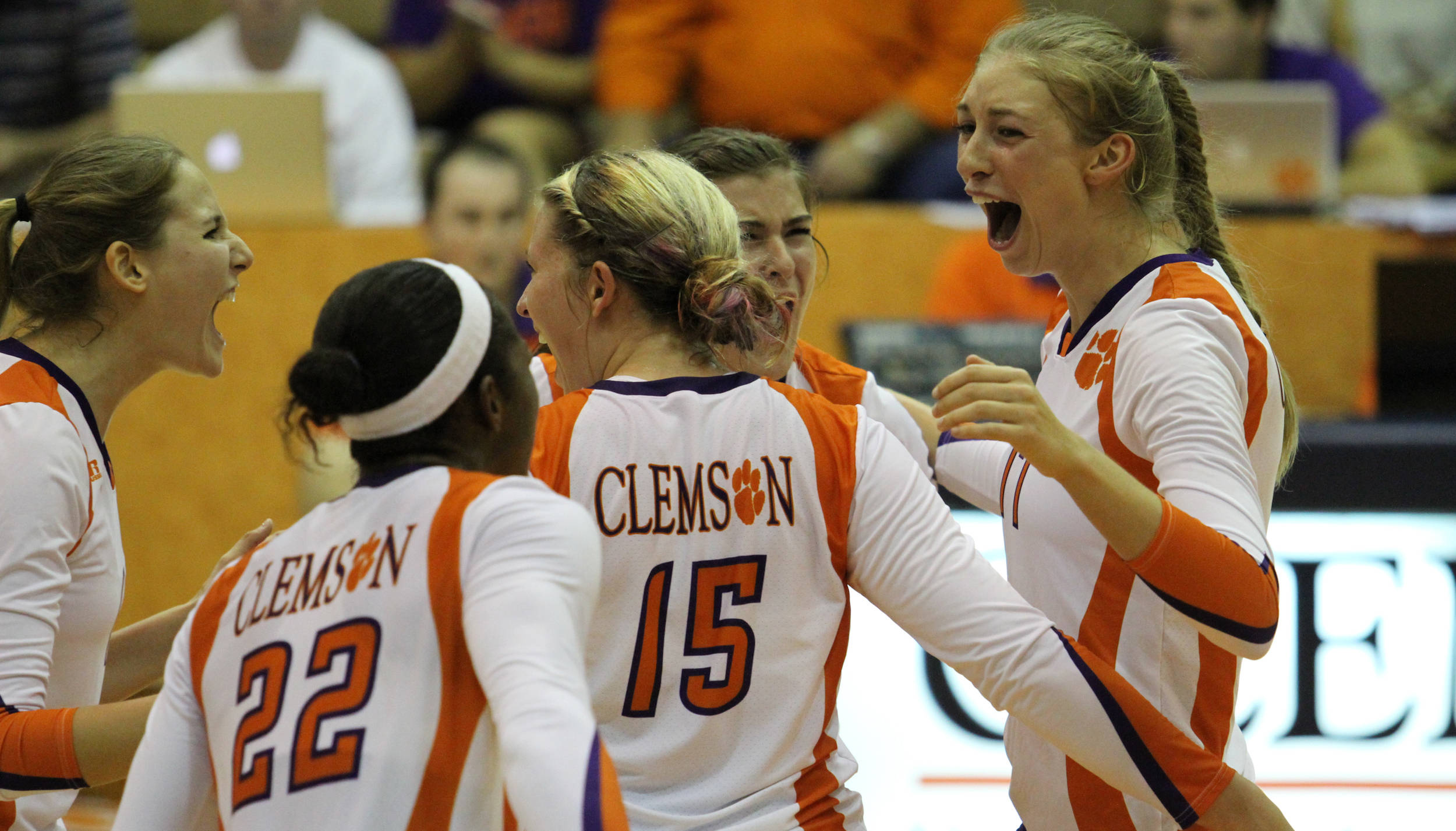 Clemson has now won three in a row in getting back to even in the conference, and earned their first road win of the season. The Tigers travel to Winston-Salem for a match against Wake Forest (7-12, 1-6 ACC) on Saturday at 5:00 pm.

Mo Simmons tallied three of her ten kills in the first five points of the fifth set, and Clemson used three blocks to help propel them to the 15-11 win in the fifth set. Duke led, 7-6, before Clemson scored four straight out of a Jolene Jordan Hoover timeout that gave Clemson a lead that they wouldn’t relinquish. Duke closed it to one point at 12-11, but back-to-back blocks set up match point, which Clemson claimed on a kill from sophomore Kristin Faust, who had ten in the match.

Sandra Adeleye led Clemson with 15 kills, while Simmons, Faust, and Serenat Yaz each added ten. Yaz also had four aces, giving her 102 for her career, and a season-high 18 digs for a double-double. Faust also had a double-double with 16 digs, and served the final five points of the fourth-set win.

The Tigers also got a season-high 10 blocks from Alexa Rand, who now has 24 in her last three matches, and is now sixth in the ACC. Fellow Ohioan Hannah Brenner had 41 assists and 14 digs for her fifth double-double of the season and 19th of her career. Senior libero Natalie Patzin had 21 digs to lead Clemson.

The win was the 504th all-time for the Hoover, moving her two victories ahead of Duke Coach Jolene Nagel on the all-time wins list.

Clemson has now won two straight in the series and improved to 22-35 all-time. It was Clemson’s first win in Cameron Indoor Stadium since the 2007 season.

Clemson opened up an early 11-4 lead in the first set, prompting a Duke timeout. The Tigers used three blocks during the run, and took advantage of several Duke attack errors. Clemson stretched it to 11 at 18-7. Overall, Clemson was able to sideout on 12 of 13 Duke serves, while countering with mini runs en route to a 25-13 set win when Faust put it away with her team-high third kill. Clemson was without an attack error in the set, while the Devils had 11 and hit -.048.

Duke flipped the momentum in the second set, opening up a 12-4 run of their own. The Tigers clawed back to within two points at 15-13 after a 7-1 run. Out of a timeout, Duke countered with a 7-1 run of their own to take a 22-14 lead, all but putting it out of reach. They’d close the set moments later, 25-17, after a pair of kills from the outside.

The fourth set was close in the beginning, with the teams trading points until Clemson was able to gain a small bit of control at 17-14, prompting a Duke timeout. The Devils came out and took eight of the next two points to take a 22-19 lead, forcing Hoover into her second timeout of the set. Duke committed consecutive attack errors, prompting a timeout from Nagel, but Brenner found Yaz for a kill off the Duke block. Brenner and Adeleye blocked Duke’s next attempt, before Brenner went to Yaz and Adeleye for consecutive points to close the set, 25-22.

Clemson scored the first three points in the third, giving Clemson a nine-point run, but the success was short-lived. Trailing 5-2, Duke called a timeout, and fought back to take a 7-6 lead. Hoover called a timeout of her own, and Clemson went to Yaz for two straight kills to take the lead, and she and Rand combined on another block. Clemson stretched the lead to 12-8 before Duke closed to one point at 12-11. Rand and Yaz then combined on another block, and Rand and Simmons rejected the next one to set up match point. Clemson went outside to Faust, who finished the match.