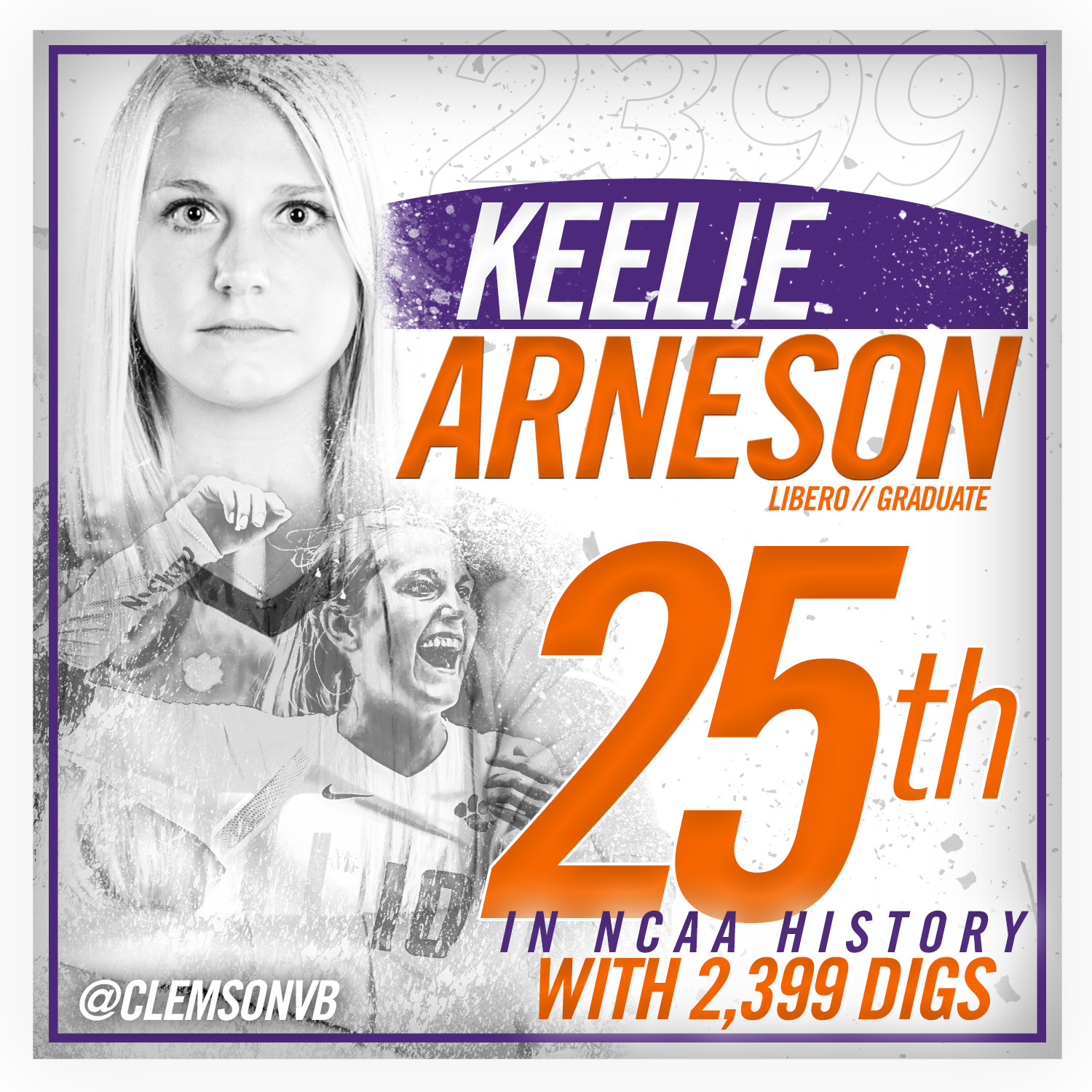 “It’s surreal on a number of fronts,” said head coach Hugh Hernesman. “To know that a year ago today she was on the operating table for a major surgery and for her to come back and play at that same level is such a testament to her surgeons and her rehab that she did. The strength coaches along the way did such a good job and she’s been determined since we’ve known her.”

Arneson’s 10th dig of the night broke her into the NCAA’s list of top 25 all-time career dig leaders with 2,399 in her career. She finished the match with 15, positioning her 24th all-time with 2,404 digs.

“Keelie came to us as an all-state setter who never played the position (libero) so that’s the other part for me that makes us so proud is to see where she has come as a player. She was this ball of clay and just a great athletic sponge that took in the training and just had this talent level that worked really well with our training.”

“It’s incredible. If you would have told me when we were watching her as a 16 year old club setter that at one point in her career she would break into the top 25 all-time dig leaders I never would have guessed that would happen. I think as we started training her and watched her develop, I’m not surprised.”

The Hernesmans recognize how crucial her ability to lead by example is for one of the youngest teams in the country.

“Here’s what you can learn from Keelie is that she’s so focused on the process,” Hugh Hernesman said. “We kind of talked about it after Sunday’s match how it’s kind of already rubbed off on Kennedy. I think any player in their fourth year, fifth year in college and they’ve been playing at a high level, they’ll set a good example.”

“She believes in what we do,” said assistant coach Stephanie Hernesman. “How we train is super unique and people come in here and it’s just very different so it takes a while to understand that sometimes you have to be bad to be good. Then they see Keelie, she’s great so they want to do it that much sooner. They want to train, see what she does and replicate that and we don’t get that all the time. Sometimes it takes freshmen a year to really try the stuff that we’re trying to get them to try. If they see Keelie do great, they’ll want to do it right away.”

Arneson’s understudy, Kennedy Wilson-Talmadge finished just two digs away from her second-straight match with 10 or more digs. Leah Perri hit .300 in the first set, propelling her to her 13th match with double-digit kills while Kailey Harvell killed seven balls in her homecoming.

“I thought we did a real nice job of going toe-to-toe with them,” Hugh Hernesman said. “That’s a very solid team, very physical. Probably more physical in person than what I saw on film. We didn’t back down from that, we challenged them. I thought we were very good from the service line, we were able to take them out of system which you have to do against great teams. Offensively too, I thought we did some things that made them uncomfortable and I think that’s the biggest thing for us is we need to take away tha comfort level for some people, especially when you play good teams and I felt like we were able to control enough of what we do to do that to them.”

“I would have liked to finish that differently, obviously, but from the standpoint of our mentality in in that kind of situation, we go down early, the crowd, top 25 team, we could have just packed it in there and gone to set two but we didn’t we competed.”

After a tight first set and taking the lead midway through the third set, Coach Hernesman sees this as another step in the right direction for the youngest team in the ACC.

“I think every match we play in the ACC raises the bar and raises the expectation. I think the younger players realized how locked in you need to be mentally and how any smaller minor mistake can really cost you not only sometimes a point but when there’s a team that has momentum that just builds momentum for them. So that’s one of the main things they’re learning is that at this level you’ve got to be able to execute. You’ve got to be able to take advantage of opportunities given to you and I thought they did a good job of that but I think they learned the value of that today.”