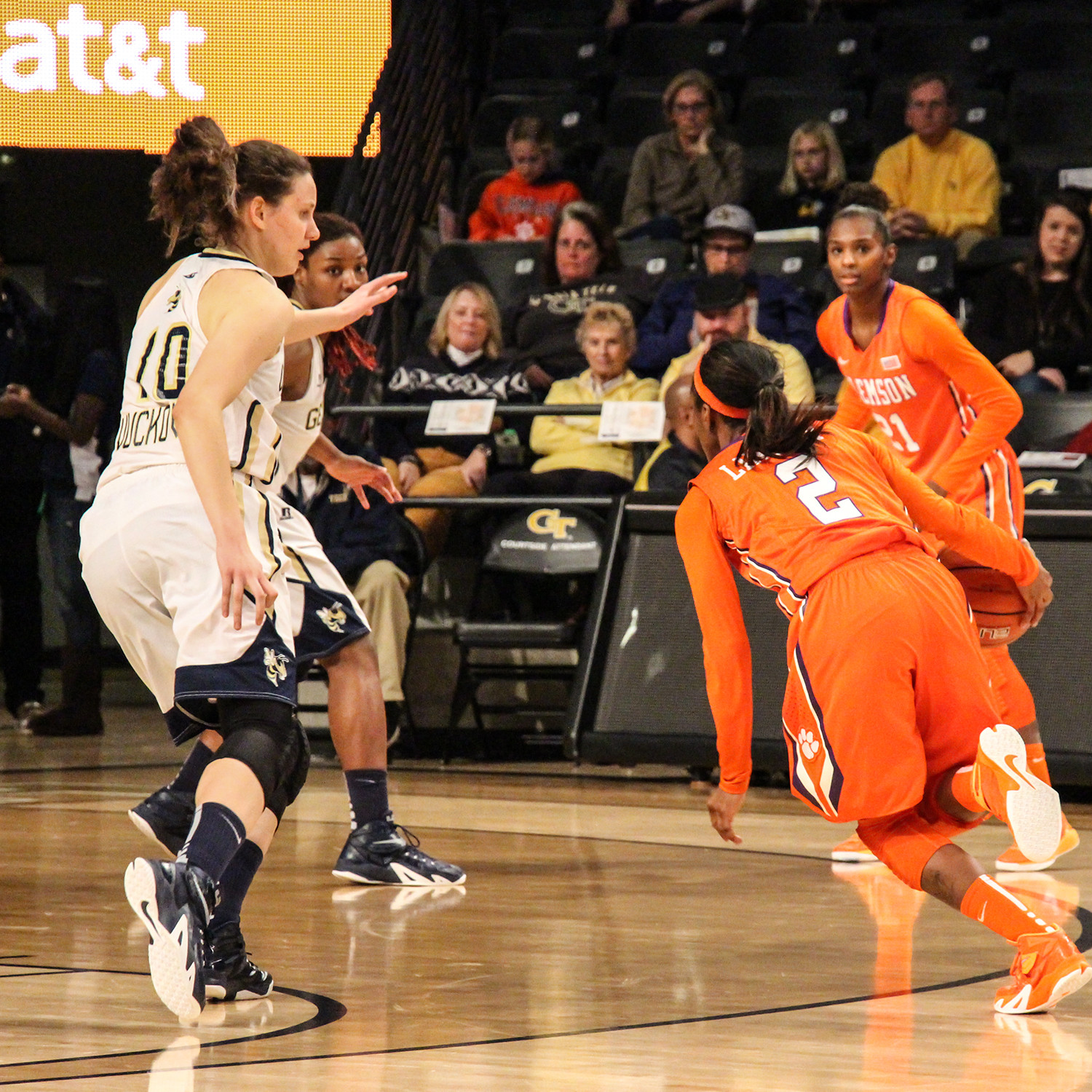 Cha’nelle Perry had all of her 14 points in the final 11 minutes in leading the comeback, while Nikki Dixon added 17 and Chelsea Lindsay had 12. Shelbie Davenport had seven points and a team-high eight rebounds in 37 minutes, often against Georgia Tech’s post players.

Georgia Tech looked to be in control when Tech’s leading scorer, Kaela Davis, drained a jumper to give the Jackets a 54-38 lead with just under 11 minutes to play. However, Clemson went on a 13-2 run over the next five minutes to cut the lead to 56-51 with 5:54 to play.

However, the Yellow Jackets responded bumping the lead back out to a dozen with 3:13 to play. The Tigers then got six straight points from Perry and Dixon to again cut it to six with 2:11 to play, but strong free throw shooting didn’t allow the Tiger to get any closer.

Roddreka Rogers had 16 points and 18 rebounds for the Yellow Jackets, while Davis added 17 on 6-19 shooting and Aaliyah Whiteside also added 17. Despite being outrebounded, 49-36, Clemson actually won the points in the paint stat, 34-30.

The Tigers just couldn’t connect from deep however, hitting just 4-23 (.174) in the game. Clemson committed a season-low eight turnovers against a strong pressing club and hit 21-47 (.446) from inside the arc.

Clemson a Florida State tip at 7 p.m. on Thursday in Littlejohn Coliseum, where the Tigers are 9-0 on the season.

The Clemson Lady Tigers fell to Georgia Tech and to 1-1 in ACC play despite committing a season low eight turnovers and double digit scoring efforts from Nikki Dixon (17), Chelsea Lindsay (12) and Cha’nelle Perry (14). Clemson outscored Georgia Tech in the paint 34-30 but could not overcome a rough shooting night from behind the arc as the Lady Tigers made only four out of 23 three point attempts. Clemson did force Georgia Tech into 13 turnovers and tallied eight steals as a team in the contest.

However, the Yellow Jackets won the rebounding margin handily 49-36 and totaled 17 assists as a team. Roddreka Rogers led the Georgia Tech attack, scoring 16 points and pulling down a game high 18 rebounds. The Lady Tigers did not give up, pulling within four points with 5:54 to play in the second half, but the Yellow Jackets proved to be too much down the stretch and eventually put the game out of reach. This is a tough loss for the Lady Tigers as Georgia Tech is considered somewhat of a rivalry matchup, because of the close proximity of the schools and the amount of Georgia natives on both squads. However, the Lady Tigers will get another crack at the Yellow Jackets in LittleJohn Coliseum on February 22nd, and I would assume that game will be another hard fought battle similar to this one.