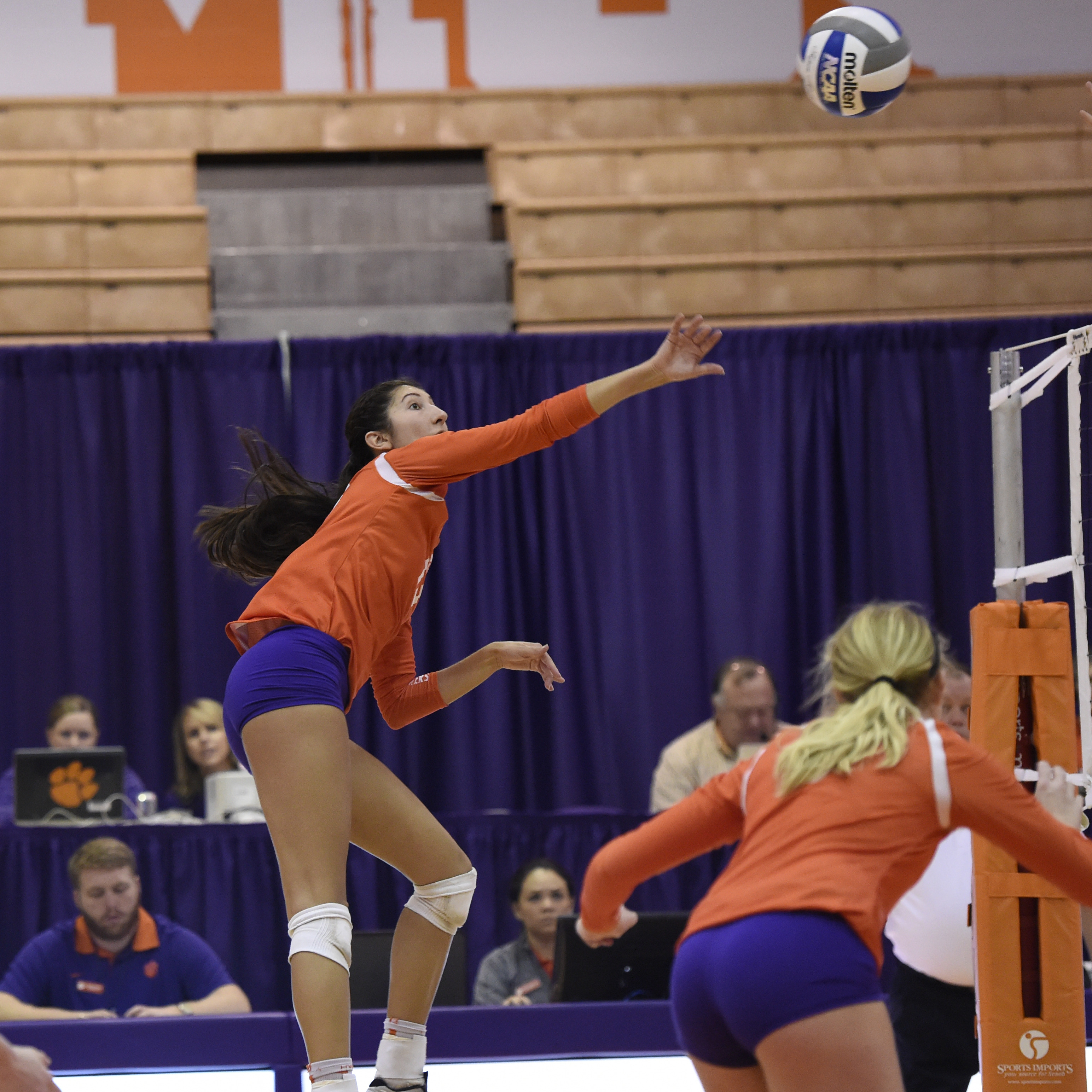 Florida State controlled the majority of the first set but the Tigers managed to stay within striking distance of the Seminoles, allowing a kill by Sydney Moseley to force FSU to call a timeout with a 23-22 lead. Following the timeout, the Seminoles thwarted the comeback attempt by winning the ensuing two points to win the first, 25-22.

In the second set, Clemson held a lead all the way until Florida State had its back against the wall with a 24-22 score in favor of the Tigers. The Seminoles then looked to ACC Player of the Year Nominee, Nicole Walch for the kills when they mattered most and she delivered, eventually winning them the set, 27-25.

“This team could have given up three or four weeks ago,” said head coach Hugh Hernesman.” That was one of the first things I told them in the locker room was that I’m really proud of the effort they’ve given and the focus they’ve played with over the course of the last few weeks. It’s difficult when you feel like you’re playing really well and things aren’t falling in your favor.”

Keelie Arneson solidified her name in NCAA history with her 20-dig performance in the final match of her collegiate career. The effort advanced her to fifth all-time in NCAA history and makes her just one-of-five student athletes to ever register 2,700 or more digs in their career. She finishes her career with 2,707 digs in a career full of accolades.

“You kind of run out of adjectives to describe her,” Hernesman said. “Her play over the course of the season was so consistent and so elite. For a player to walk into the ACC and lead the conference in digs and be Top 20 in the country in digs per set, and her presence and the things she is able to do, she really makes so many people so much better. That’s her gift.”

“You see the spectacular, you see the digs and you see the numbers, but just in terms of making people better, her presence and the things she can cover up when we make mistakes in other areas is invaluable. She has a great positive outlook, always competing hard, great teammate, gets after it, she’s everything you ask for in a player. That was a fantastic way to wrap up a historic career and I think she probably feels good about how she played here.”

In Arneson’s lone season of ACC competition, the Tomball, Texas native led the conference with 576 digs and a 5.24 digs per set average. The average places her 19th in the country and gives her a 5.30 digs per set average in her career, tying her for 25th in NCAA history.

“She plays at an elite level, and it sets a very good tone for our returners,” Hernesman added. “When they pay attention to the way she works and the way she trains, they see she’s someone they should all model and I think a lot of them did. It drove Leah to get better and I know she looked to Keelie in how she worked and those two worked so hard together, everybody followed.”

Leah Perri added 12 kills to the best season of her career in the match and was just a dig shy of a double-double but Sydney Moseley stole the spotlight offensively for the Tigers. Moseley enjoyed the best match of her career, throwing down 11 kills on 26 attempts with three errors for a .308 hitting percentage on the outside.

“Syd is a really smart kid and she is very cognizant of the training. She takes it and she runs with it and she works hard at it. It was exciting to see her have a great offensive match like she did today. Usually she’s a very important part of our ball control on defense but when we get offense like that from her, it’s fun to watch. She was hitting it hard, she was attacking their hands, creating shots and she was playing smart. She was playing within the game plan. We saw some things we could exploit just like there is with every team, even the great ones and she took advantage of those.”

“It was good to see her take a step like this even as late as it is in the season. It paid off for her today against a great team and I think she should be really proud of her effort and this will be a match I’m sure she’ll remember for a long time.”

The threat of Kate Federico and Megan McGinley in the middle opened up opportunities for Moseley and Perri on the outside. Federico dropped four kills to go along with her 30 assists, three service aces, four digs and three blocks.

“Kate was aggressive again offensively and that forced them into blocking schemes that freed up some of our other options. It’s one of those things, we talked about this after the Miami match, we took a very aggressive approach against them. We kind of put ourselves out there and we found that we ended up with some very good results.”

Federico connected with McGinley for six kills on 12 attempts for a .417 hitting percentage due to one error to go along with one block.

“We know they’re going to make some mistakes in those moments but Megan didn’t really make a lot of those mistakes. She played aggressively and it worked out for her. She got great swings, did the things we were asking of her, and it’s good to see her continue along that path and it’ll be exciting to get back with her, and our other middles as well, to get them some good technical training because they kind of went into this season blind as freshmen with not a lot of training. It’ll be fun to continue to watch them grow over then next three years.”

Kennedy Wilson-Talmadge played a big part of Clemson’s defensive stand against the Seminoles with her nine digs on the day while Lou Davis added a pair in her final match as a Tiger. Sofia Hruby added three kills and two blocks alongside Alex Lynch matched Hruby’s kill total in her final match as well.

“They came in, they were focused, they played hard, they competed hard, they continue to improve and I think everybody sees the level of improvement they’ve made,” said Hernesman.” I have fans, I have coaches calling me, I have coaches that we play, I have parents, they all see it, and it’s good that other people see it because our players really deserve that credit. They have worked hard for it, they realize this is building into something great and it has to start somewhere. This was just a small piece of what we need to do and we’ll continue to progress as we go along here.”