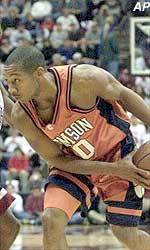 We experienced technical difficulties and apologize for the poor audio quality.

“I’m smiling now, but I was sweating for about 40 minutes,” Krzyzewski, whose top-ranked Blue Devils (20-1, 8-1 Atlantic Coast Conference) team blew a 15-point lead and trailed late in the game for the first time in weeks before beating Clemson 98-88 on Saturday night.

The Tigers were supposed to be Duke’s next easy mark, with five straight losses coming in and coach Larry Shyatt talking of internal team problems in a loss to North Carolina this past Sunday.

For a while, it was all Blue Devils.

Williams hit four of his five 3-pointers in the opening half as Duke took a 50-35 lead. But the Tigers charged at Williams and the Blue Devils took a 67-66 lead in the final five minutes.

However, Williams had a power drive in the lane and Dahntay Jones, who scored 11 of his 16 points after halftime, had two foul shots and a bucket to retake control.

Clemson made one last charge with Ray Henderson’s three-point play and inside basket, and Chris Hobbs two foul shots to get within 77-76 with 5:24 remaining.

Duke then took off for good with a 10-0 run, keyed by Chris Duhon’s 3-pointer and Mike Dunleavy’s four points.

“I think Clemson has a pretty good team,” Williams said. “They are a tough basketball team, especially here. You have to respect them.”

Dunleavy finished with 22 points, and Jones had 16 as the Blue Devils reached 20 victories for the 38th time in school history.

Edward Scott and Stockman each had 20 points for Clemson.

Even when Clemson’s charge looked to fall short, the Tigers stayed aggressive. Tomas Nagys faced down Dunleavy following a rebound as the two shouted at each other.

Moments after Jones’ high flying jam, he gestured, yelled and swung his arms through the air at Stockman as the Tigers moved to the bench during a timeout.

Shyatt angrily flew off the bench toward Duke’s side and had to be restrained by assistants and officials to the cheers of a sold-out Littlejohn Coliseum.

No fouls were assessed, and even Krzyzewski stood on the court moving his hands in a “calm down” motion.

The coaches chatted politely in front of the scorer’s table when the game ended.

Shyatt said that was not the way for a college head coach to act. Jones “said something and I probably didn’t treat it like I should have,” Shyatt said. “It was a spur of the moment thing.”

Jones didn’t remember what he said, only that Duke was able to win in Littlejohn Coliseum.

Duke has won by an average margin of 20 during the win streak. “Maybe we needed one like this,” Jones said.

Williams and Dunleavy, as they have all season, broke open a tight game in the first half.

After Clemson got within 22-20 halfway through the first half, Williams and Dunleavy combined for all but three points in an 18-7 run.

Dunleavy started things with a three-point play, Daniel Ewing added a 3-pointer, then Williams hit one and Dunleavy followed from the same distance.

When the Tigers got it back to 34-27 on Jamar McKnight’s basket and Tony Stockman’s 3-pointer, Williams easily moved down the court to set up for two long-range baskets and give the Blue Devils a 40-27 lead.