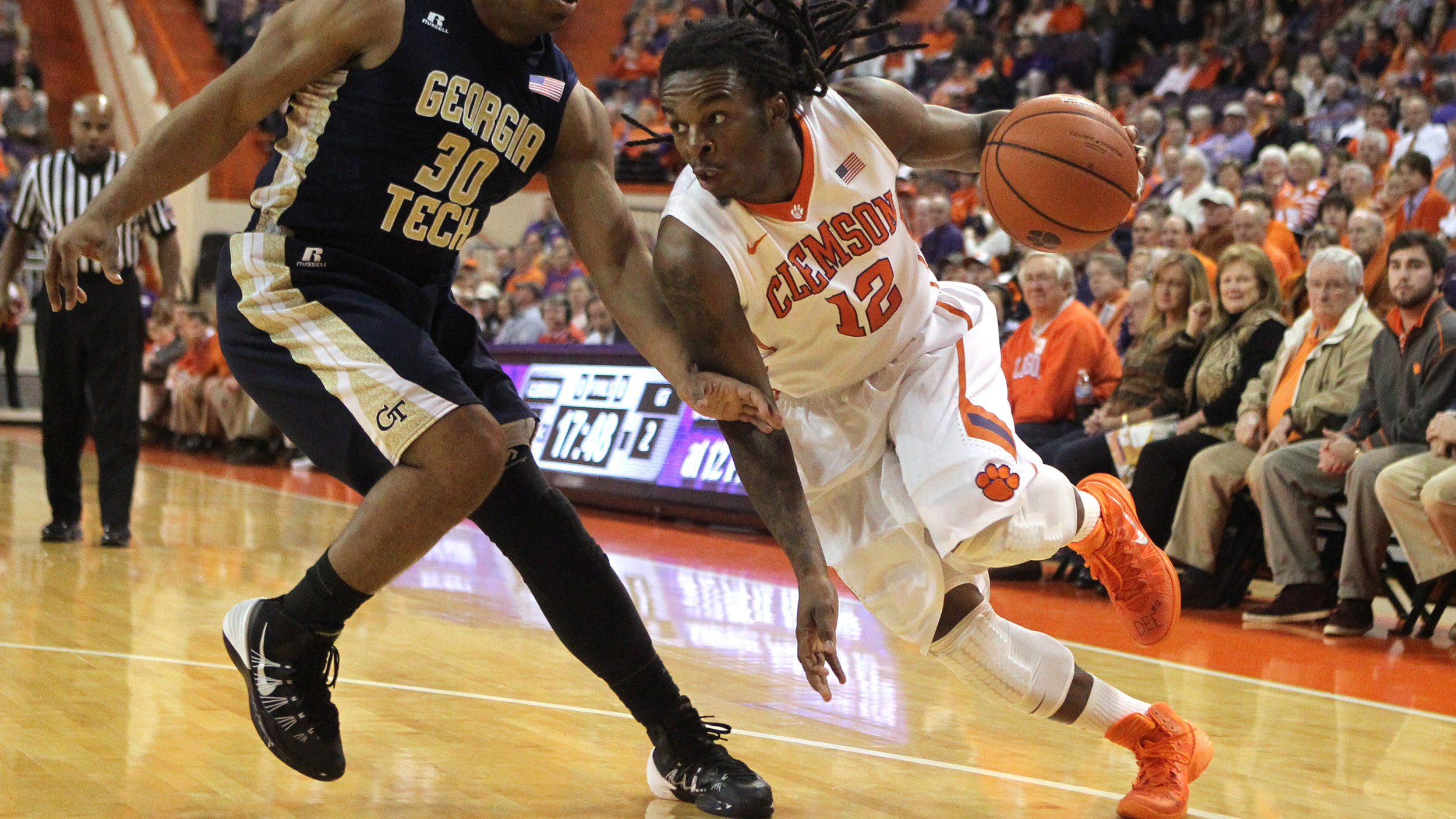 CLEMSON, SC – Clemson won its 500th game in Littlejohn Coliseum on Tuesday, a grinding 45-41 victory over Georgia Tech in front of 7,248 fans. The Yellow Jackets missed two chances to tie in the final seconds, and Jaron Blossomgame sealed the win from the free throw line for the Tigers, who improved to 15-6 overall and 6-3 in the ACC. The Jackets fell to 12-11, 3-7 in conference play.

K.J. McDaniels, Clemson’s leading scorer, struggled Tuesday after a 26-point outing on Saturday at Florida State. He made just 3-of-14 shots and scored only eight points. Jordan Roper led the Tigers with 12, while Landry Nnoko added seven. Georgia Tech center Daniel Miller led all players with 18 points. Both teams shot below 35 percent from the field Tuesday.

Both teams started 2-of-7 from the floor before Tech heated up a bit. The Jackets made four of their next six field goals to take a 13-11 lead at the halfway point of the opening half. Georgia Tech played with a slim lead most of the first half, as Clemson struggled to shoot the ball from the perimeter.

Roper splashed in his second three of the opening period with just over two minutes left and Clemson began a 7-0 run into the locker room. The diminutive guard even had a putback underneath to supply the half’s final points.

In the second half, Clemson suffered through an all-too-familiar dry spell before Damarcus Harrison broke the drought with a jumper on the break. His shot put the Tigers up three, but Tech answered with eight straight to regain a 37-32 lead. But Clemson answered right back with nine of its own to lead 41-37, two of which came on an alley-oop from Rod Hall to McDaniels after a Tech turnover on the other end.

The Jackets battled back within two on multiple occasions in the final three minutes, and trailed 43-41 with 1:31 left after Miller nailed an uncontested jumper. Clemson could not get its shot to fall in the final 20 seconds, setting up Tech’s final possession. McDaniels blocked the first attempt and Tech missed a second, leading to Blossomgame’s game-high ninth rebound. He made both free throws to extend the lead to the final margin of four points.

The Tigers return to the road for a two-game swing against two of the ACC’s newest members, Syracuse and Notre Dame. Clemson will take on the No. 1 ranked Orange on Sunday at 6 p.m. in the Carrier Dome.