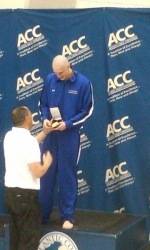 ATLANTA, Ga.–School records fell once again for the Clemson men’s swimming team on Thursday at the 2011 ACC Championships at the Georgia Tech Aquatic Center in Atlanta. The Tigers finished the second day of competition in fourth place with 154 points. Virginia is currently in the lead with 280 points.

Eric Bruck’s victory in the 50 freestyle highlighted another stellar day at the conference meet for the Tigers, after the team set records in both relay events on Wednesday.

Bruck became the school’s all-time leader in the event with a swim of 19.56 seconds. His time was 15-hundredths of a second quicker than any other competitor and was an NCAA-B qualifying time.

“I am flat-out proud of Eric Bruck,” Head Coach Christopher Ip said. “He has been huge for us all season and it is great to see a sophomore handle the pressure of the ACC Championships. We need more guys to step up and keep this ball rolling. Our staff has done a great job this year and it is being reflected in the way our school record board is being rewritten at this meet.”

Chris Reinke also posted an NCAA-B time with his 14th-place swim of 20.29 seconds in the 50 freestyle, which is ninth-best all-time at Clemson. Seth Broster finished in 16th place with his 20.33-second swim.

When the 200 individual medley ended, four Tigers found their names on the school’s top ten list. Chris Dart strengthened his own school record by almost half a second with a fine swim. He registered an NCAA-B cut time of 1:46.79, besting his previous Clemson record time of 1:47.23.

Steven Gasparini finished in 12th place in the event, posting an NCAA-B time of 1:49.03. That swim put him in sixth place on the all-time Clemson list. Lucas Gerotto’s NCAA-B qualifying time of 1:48.73 was fourth-best in school history. Andrew Abeysinghe also joined the top ten list with a time of 1:50.30.

Another school record fell in the 200 freestyle relay, as the grouping of Bruck, Reinke, Broster, and Dart swam an NCAA-B cut time of 1:18.90, which was good enough for third place in the meet.

David Gordon finished in tenth place in the 500 freestyle with a time of 4:24.61, earning seven points for the Tigers.