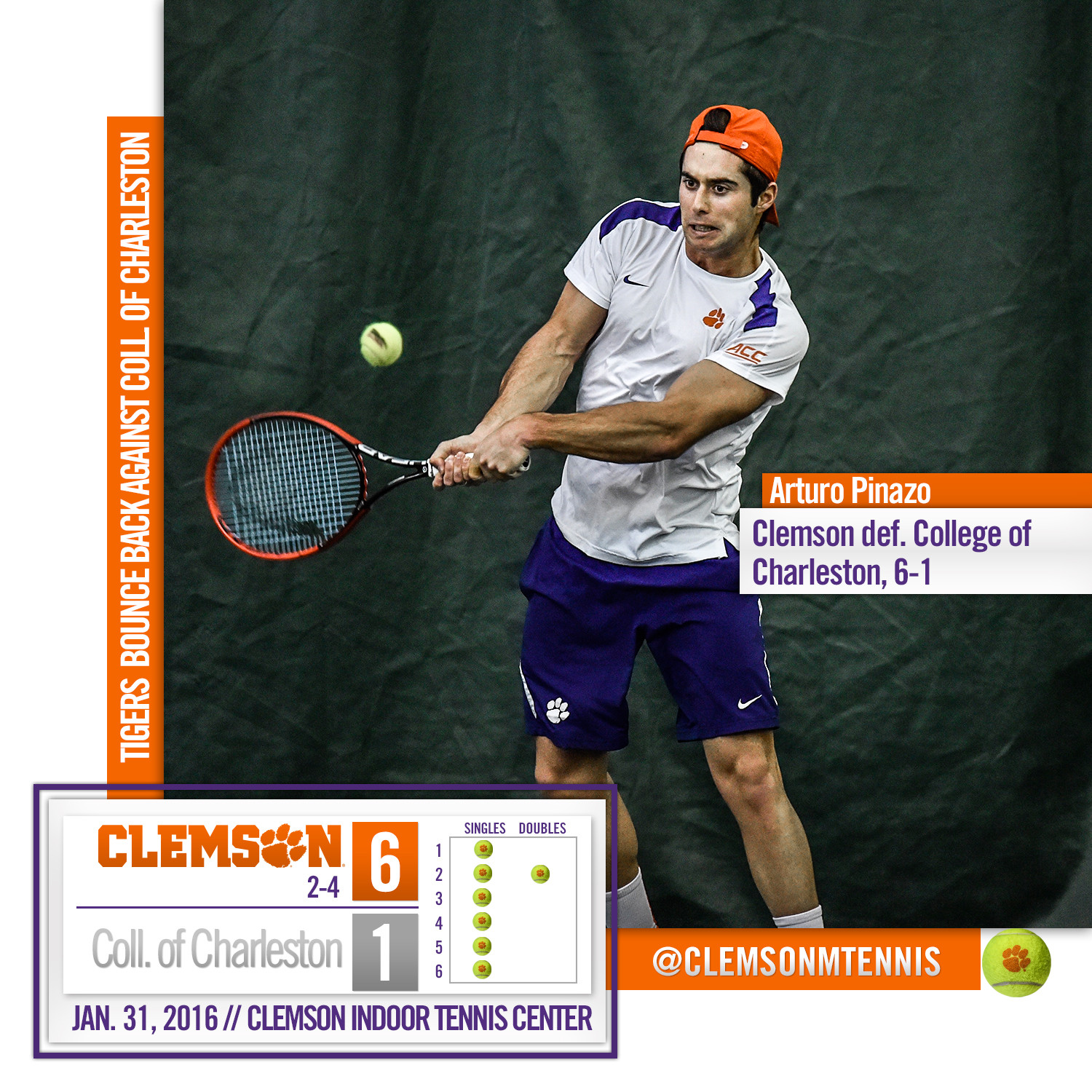 Tigers Bounce Back Against College of Charleston

CLEMSON, S.C. – After four straight losses on the road, the Clemson men’s tennis team returned home on Sunday and bounced back with a 6-1 win over College of Charleston. The Cougars open their season at 0-1 with the loss, while the Tigers improve to 2-4 on the year with the win.

“I am really proud of the team today. It has been amazing; in the past ten days we have covered thousands of miles in travel. I know it has been difficult for the guys. It has been a grind, but also has been a great opportunity to not only play great teams, but to persevere in tough situations,” said Head Coach Chuck McCuen. “It has helped us with our focus and handling what we preach day in and day out about attention to detail. After getting in late last evening, I thought the guys really did a tremendous job with that. Now we will go back to work, after one day off, and get ready for our double header next Sunday against Wofford.”

College of Charleston secured the doubles point against the Tigers, claiming victories on courts one and three. Alex Favrot and Daffra Sanon won at No. 2, 6-4, after Robert Dudley and Luke Johnson fell to their Cougar opponent, 6-3, at No. 1. The clinching point came down to Austin Ansari and Christian Harris, who fell 6-3 at No. 3.

The Tigers rebounded convincingly in singles play, claiming all six points to clinch the team victory. Arturo Pinazo clinched the victory, as the junior from Malaga, Spain dropped the first set, 6-1, before storming back to win the next two sets 7-5, 6-3, at No. 4 singles. Sanon, at No. 3 singles, Ansari, at No. 4 and Favrot at No. 1, all won in straight sets. Johnson, playing on Court 2, battled for three sets before prevailing for the win. Brent Lett also won his third-set tiebreak, 10-5, at No. 6 to complete the singles sweep for the Tigers.

Clemson continues the front end of its 12-match home stand next weekend. The Tigers return to the courts for a double header against Wofford on Sunday, Feb. 7. The first of two matches against the Terriers begins at 10 a.m. at the Clemson Indoor Tennis Center. The second match is set for 3 p.m. Live stats will be available on ClemsonTigers.com, and in-match updates will be available on Twitter, @ClemsonMTennis.