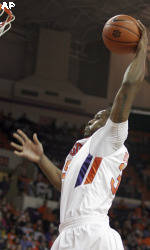 So on the next possession, Trevor Booker took a pass on a fast break and slammed it home as he got hit in the face, thumping his chest as he landed. By then, the 24th-ranked Tigers had finally put away Western Carolina in a 79-57 victory on Tuesday night.

“He tried to outshine me, but I couldn’t let that happen,” Trevor Booker said.

The Tigers (11-2) scored 19 straight points over 7 minutes late in the second half, and the Bookers were responsible for most of them. Trevor, a senior, ended up with 31 points, while Devin, a freshman, scored 10. It was one point off the career high for each brother.

“I wouldn’t call it a competition. Both of us were just feeling it,” Devin Booker said. “He did what he had to do and I did what I had to do. We just kept going back and forth.”

The Tigers have won four straight, all by double digits. But this one took a while to put away.

The Catamounts trailed 56-51 with 8 minutes to go when the Bookers took over.

Western Carolina missed 10 straight 3-pointers during the run and by the time Harouna Mutombo hit a 3 with 1:05 left, the Catamounts were down 75-54. They made 7 of 30 from beyond the arc, well below their average of almost 35 percent.

“We had a lot of good open looks, but just stopped hitting the shots,” said Western Carolina coach Larry Hunter, whose team had won 10 in a row, including a victory at Louisville.

Mutombo led Western Carolina with 19 points, while Brandon Giles added 12 on 5-of-21 shooting from the field.

It was Western Carolina’s first loss since opening the season with a 73-41 defeat to No. 2 Texas. The 10-2 start remains the Catamounts’ best in more than 50 years.

Clemson is beating teams by an average of 24 points since losing a 23-point lead in a 76-74 loss to Illinois at the beginning of the month that bounced them out of the Top 25 until this week.

The Tigers have one more nonconference tune up against South Carolina State before opening Atlantic Coast Conference play at No. 7 Duke.

If there was one flaw for the Tigers on Tuesday night, it came at the free throw line. They made just 16 of 32 foul shots and Trevor Booker was 8 of 17 from the line.

But otherwise, whenever Clemson needed a lift, Booker was there. With the score tied at 24 with 5 minutes left in the first half, Booker had a huge dunk and a driving layup, then had a steal and was fouled on another driving layup to start a 19-8 run.

When the Catamounts cut the lead to 46-41 early in the second half, Booker had consecutive blocks, then three possessions later, with Clemson up by four, Booker buried a 3.

But Western Carolina was still hanging around as the clock rolled under eight minutes. That’s when Tigers coach Oliver Purnell put Devin Booker in with his brother.

Trevor started the 19 straight points with a free throw, and Devin made a layup to put Clemson up 59-51. With 5:30 left, Devin followed a miss with a dunk and 20 seconds later, Trevor took a long pass on a fast break, slamming home a thunderous dunk. The next trip down, Devin had his own monster slam.

The Catamounts called a couple of timeouts, but couldn’t stop things.

“I think there is a little bit of a chemistry there,” Purnell said of the brothers.

Purnell encourages Devin to look up to his brother, sometimes pitting the two against each other in practice, and sometimes letting them play together.

And he holds them up as an example to the rest of his team as part of his teamwork philosophy.