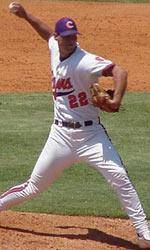 Clemson scored 12 runs in the first four innings and tied a season-high with 19 hits in the Tigers’ 13-5 victory over #6 South Carolina Wednesday night in front of 5,782 fans at Sarge Frye Field. With the victory, Clemson evened the season series 2-2 in the final regular-season game between the Palmetto State rivals. Clemson improved to 20-13 overall, while the Gamecocks fell to 25-8.

Herman Demmink was awarded the Bob Bradley Award, which goes to Clemson’s MVP of the four-game series between the two rivals. Demmink was 7-for-15 with two homers, a triple, and four RBIs in three games against the Gamecocks. South Carolina’s MVP for the series was Steve Pearce. He was awarded the Tom Price Award. The awards are named in honor of the SID legends from the respective institutions. Price is still the official scorer at Gamecock baseball games, while Bradley passed away in 2000.

The Tigers jumped out to a 5-0 lead in the second inning. Back-to-back doubles by Andy D’Alessio and Travis Storrer to centerfield put runners at second and third with no outs. Russell Triplett, who was questionable before the game with a hand injury, hit a 2-0 pitch deep over the fence in left field to give the Tigers a 3-0 lead. It was Triplett’s third homer of the year. Later in the inning with one out, Garrick Evans walked, went to third on Demmink’s second single of the game, and scored on Kris Harvey’s single to left-center. Brad McCann followed with a sharp single through the left side to plate Demmink.

Clemson put another five-spot on the board in the third inning. Evans started the scoring when he hit a three-run, opposite-field home run to right-center. Storrer had led off the inning with a single to center and Triplett was hit by a pitch. It was Evans’ first homer of 2004. Demmink followed with a triple down the first-base line and scored when Harvey hit the next pitch off the top of the fence in left field. McCann laced another single up the middle to score Harvey from second and give the Tigers a 10-0 lead.

Evans came through again in the fourth inning. After Colvin lined a soft single to right field, Evans hit an opposite-field double to right-center to score Colvin from first. Harvey then hit a hard ground ball to shortstop, but Bryan Triplett was unable to make the play, enabling Evans to score from second.

Landon Powell finally got the Gamecocks on the board in the bottom of the fourth when he hit the first pitch of the inning deep over the right-field fence. It was Powell’s 10th long ball of the year and 35th of his career.

The Gamecocks mounted a rally in the seventh inning. After chasing Jackson with the bases loaded, Davy Gregg golfed a two-run single up the middle on a 1-2 pitch. But reliever Josh Cribb got Powell to ground into an inning-ending double play with runners at the corners to keep the Tigers ahead 12-3.

Clemson added an insurance run in the eighth inning. With runners on second and third, Evans slapped a single to right field, plating D’Alessio. But Triplett was called out at the plate by the home plate umpire.

The Gamecocks cut further into the Tiger lead in the eighth inning. David Cash’s bloop single down the right-field line plated two runs, cutting the Clemson lead to 13-5.

Evans led the Tigers with three hits, three runs scored, and five RBIs. He ended the season going 7-for-10 against the Gamecocks. Demmink and McCann also added three hits. Triplett, playing in his last rivalry game, had a double, homer, and three RBIs. Powell led the Gamecocks with two hits in five at-bats.

Clemson will travel to Chapel Hill, NC to play a three-game series at #10 North Carolina this weekend. First pitch Friday is scheduled for 7:00 PM.