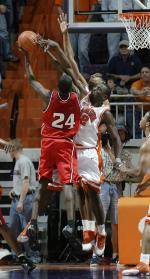 Each of the last four games in Littlejohn Coliseum betweenClemson and NC State have been decided by five points or less. Bothteams have won two of these games. Clemson won the last meetingbetween the two teams, 60-55 last year at Littlejohn Coliseum. Itis Clemson’s last win over an ACC team in Littlejohn Coliseum.Clemson held the Pack to 6-37 threepoint shooting. The 31 missedthree-point attempts is the most by one team in LittlejohnColiseum. Clemson has played five of its first seven ACC games onthe road, the only school that has done that. In fact, Clemson andNC State are the only two league teams that must play five roadgames within its first eight league games. Clemson has had fivegames come down to a threepoint attempt within the last 10 secondsof the game. Clemson is 2-3 in this situation. All three losseshave come within Clemson’s last three road games. Clemson has lostfour ACC road games by 16 total points. Last year Clemson losteight ACC road games by an average of 16 points. Sharrod Ford iscoming off a 20-point, 15-rebound performance at Miami (FL). He isnow just 47 points away from 1000 for his career. When he reachesthat mark he will be the first Clemson frontcourt player to score1000 points since Harold Jamison reached the plateau in 1998-99.Clemson has a 5-3 record against NC State in Littlejohn Coliseumsince Herb Sendek became the head coach of the Pack in 1996-97. Inthe five Clemson wins the Tigers have held the Pack to .222three-point shooting (28-126). In the three Pack victories, NCState has made 48.4 percent of its threepoint attempts (36-74).Clemson has two players on its roster from the Raleigh area. ShawanRobinson is from Raleigh and played at Leesville Road High School.James Mays is a freshman from Garner, NC who played at Garner HighSchool. Ten of the last 12 Clemson games, the team that has won thefirst five minutes of the second half has gone on to win the game.That was the case against Miami (FL) last Wednesday when theHurricanes outscored Clemson 14-8 in the first five minutes of thesecond half to erase a four-point Clemson halftime lead, on the wayto their four-point win. Clemson is ninth in the nation in stealsper game this week. Tiger guard Vernon Hamilton is 31st in thenation in that category. He has a 2.02 average for his career on aper game basis, best in school history. Clemson has 20 ACC winsover NC State in Littlejohn Coliseum, more than any other school.