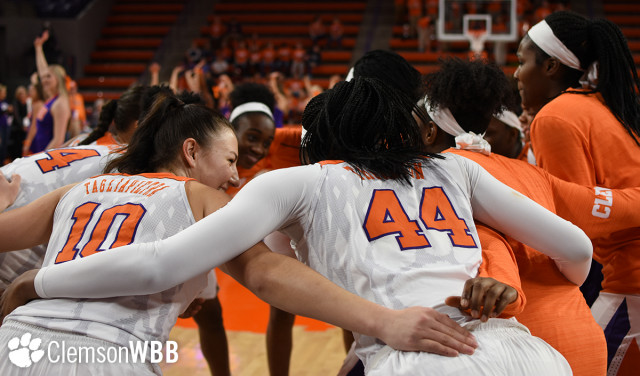 Tigers Battle On the Road, but No. 4/4 Louisville Comes Out on Top Wednesday

LOUISVILLE, Ky. – The Clemson women’s basketball team never stopped fighting, but ultimately, the offensive firepower of No. 4/4 Louisville pushed the Cardinals over the Tigers, 65-46, on Wednesday night at the KFC Yum! Center in Louisville, Ky. With the loss, the Tigers drop to 11-14 (1-11 ACC), while Louisville improves to 25-1 (11-1 ACC).

The Tigers started the game on a good note, as junior Danielle Edwards hit a three to open the first quarter, and kept the momentum going throughout the period. At the end of the first quarter, they trailed the nation’s No. 4 team by just two points, 15-13. Junior Aliyah Collier provided a great boost off the bench, scoring four points in her first two minutes in the game. Clemson outrebounded the Cardinals 9-7 in the period, and held them to 1-for-7 from three-point range.

Clemson continued its momentum into the second quarter, taking a 19-18 lead at the 4:41 mark thanks to two free throws by senior Alexis Carter. The Cards’ offense began to heat up after that, ending the quarter on a 14-2 run to take a 32-21 lead into halftime.

Sophomore Kobi Thornton scored the first seven points of the third quarter for the Tigers, but Louisville’s offensive momentum carried over into the second half when they built up a 14-point lead midway through the period. Clemson chipped the lead back down to single digits with a three-pointer by freshman Destiny Thomas as the shot clock expired and a jumper by Collier, but Louisville held on to a 47-34 lead heading into the fourth quarter.

After Clemson held the Cards to 2-for-11 from three-point range in the first three quarters, Louisville opened the fourth on fire from three, making 3-for-4 in the first four minutes to put the game out of reach. The Tigers never stopped fighting, as Thornton added six more points in the final period.

Thornton finished the game with 13 points, her eighth consecutive game scoring in double figures. Collier was one point shy of a double-double, finishing with nine points and 10 rebounds, and also tallied two steals. In another solid all-around effort, Edwards had eight points, three rebounds, three assists and two steals in the contest.

The Tigers return to action on Sunday, Feb. 11 as they host No. 18/18 Duke at 2 p.m. at Littlejohn Coliseum. The game is Clemson’s #Play4Kay game and the program will be raising awareness for cancer when they face off against the Blue Devils.