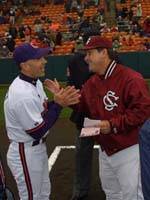 Clemson vs. South Carolina Clemson (18-13) will play host to #4 South Carolina (28-5) Wednesday at Doug Kingsmore Stadium in the third of four matchups between the two rivals. First pitch is scheduled for 7:15 PM. The game will be broadcast live on the radio by the Clemson Tiger Sports Network and can be heard live via the internet at ClemsonTigers.com. Live stats will also be available on Clemson’s website. The game is designated as a “Solid Orange” event. The game will be televised live by Comcast/Charter Sports Southeast. Clemson will play the final of four games against the Gamecocks next Wednesday at 7:00 PM at Sarge Frye Field.

The Series Clemson and South Carolina have met 269 times on the diamond, with Clemson holding a 157-110-2 lead in the series dating back to 1899. South Carolina is Clemson’s most-played rival in history.

Tiger Head Coach Jack Leggett is 22-19 against South Carolina as Clemson’s head coach, including a 10-9 record in games played at Clemson.

Career-wise, Demmink and Storrer have each hit two homers against the Gamecocks, while Storrer has a team-high seven RBIs in five games against the in-state rivals.

The Starting Pitchers South Carolina will start freshman righthander Andrew Cruse (3-0, 2.49 ERA) on the mound Wednesday. The Cornelius, NC native has made 10 relief appearances, therefore he will be making his first career start. In 21.2 innings pitched, he has allowed 17 hits and four walks while striking out 14.

The Tigers will counter with sophomore righty Stephen Faris (2-1, 0.50 ERA) on Wednesday. The Richmond, VA native has made two starts and eight relief appearances for a total of 36.1 innings pitched. He has allowed only 19 hits and 13 walks while striking out 34. He also leads the nation in ERA and the ACC in opponents’ batting average (.165).

The Gamecocks South Carolina, led by ninth-year Head Coach Ray Tanner and ranked #4 in the nation, enters Wednesday’s game with a 28-5 overall record and 8-4 SEC mark after sweeping #6 Louisiana State in Baton Rouge over the weekend. The Gamecocks, who are 8-2 on opponents’ home fields, have won nine games in a row.

Perhaps the best facet of the Gamecocks is their outstanding defense. They are among the national leaders with a .977 fielding percentage, committing only 28 errors in 33 games.

The Gamecock pitching staff sports a 2.65 ERA and .226 opponents’ batting average. Closer Brent Marsh has seven saves and a 2.03 ERA in 10 appearances. South Carolina has struck out 281 batters against only 94 walks in 295.0 innings pitched, good for a 3.0 strikeout-to-walk ratio. The staff is also allowing opponents only a .295 on-base percentage. It has allowed teams to total at least 10 hits in only six games this year, including a high of 13 (three times), and have not yielded double-digit runs all season.

Two Gamecocks, Ryan Mahoney and Mark Stanley, both have brothers who are former Tigers. Mahoney, whose brother Collin (RHP) played three seasons (2002-04) at Clemson, and Stanley, whose brother Henrí (OF) played four years (1997-00) at Clemson, have both been inserted into the starting lineup in recent weeks. Both former Tigers are currently playing in the minor leagues.

The Tigers Clemson enters Wednesday’s game against South Carolina with an 18-13 overall record and 9-3 ACC mark after sweeping Duke in a three-game series over the weekend. The Tigers, whose last seven losses have been by a combined 10 runs, are 6-8 on opponents’ home fields in 2005.

The Tigers upped their season batting average to .296 thanks to hitting .349 in the Duke series. The team also is hitting .320 with runners in scoring position thanks to going 21-for-34 (.618) against the Blue Devils. The team’s hottest hitter is freshman centerfielder Stan Widmann (SS) is hitting .300.

The pitching staff has a 3.46 ERA and .259 opponents’ batting average. The staff also has a 8.37 strikeouts per nine innings pitched mark, the best figure since the 1996 staff (9.69) that had the likes of Kris Benson, Billy Koch, and Ken Vining. Clemson has not allowed a home run in 11 straight games and has yielded an ACC-low nine long balls in 2005.

Tigers & Catamounts Halted in Fifth Inning With Clemson leading Western Carolina 4-2 in the bottom of the fifth inning in Cullowhee, NC on April 12, the game was halted due to inclement weather and wet field conditions. The game will resume at Clemson on April 19 at 5:00 PM. The regularly-scheduled game between the two will start at 7:15 PM barring a late finish to the halted game.