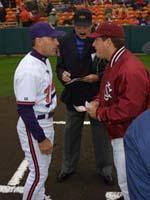 Tigers and Gamecocks Renew Rivalry on the Diamond Saturday at 2:00 PM

Clemson vs. South Carolina Clemson (5-5) will play host to #4 South Carolina (13-1) Saturday at Doug Kingsmore Stadium in the first of four matchups between the two rivals. First pitch is scheduled for 2:06 PM. The game will be broadcast live on the radio by the Clemson Tiger Sports Network and can be heard live via the internet at ClemsonTigers.com. Live stats will also be available on Clemson’s website.

The game will be televised live by Comcast/Charter Sports Southeast. Clemson will make the return trip to Columbia to play South Carolina at Sarge Frye Field on Sunday at 1:30 PM. The two will also play another home-and-home set in April.

Ticket Availability A limited number of general admission (standing room) tickets will be available at Doug Kingsmore Stadium prior to the game against South Carolina on Saturday. General admission tickets will be available at the left-field gate starting at 12:00 PM on Saturday. Prices are $10 for adults and $8 for youths. Reserved seats are sold out. Clemson students and faculty/staff will be admitted free with proper identification at any gate. Once stadium capacity is reached, gates will be closed. No one else will be admitted, including Clemson students and faculty/staff. Items prohibited in Doug Kingsmore Stadium include alchohol, artificial noisemakers, folding chairs, food & drink containers, large bags, pets, and umbrellas. First pitch is scheduled for 2:06 PM.

The Series Clemson and South Carolina have met 267 times on the diamond, with Clemson holding a 157-108-2 lead in the series dating back to 1899. South Carolina is Clemson’s most-played rival in history. Last season, the two split four games. South Carolina won the two early-season meetings by scores of 5-2 and 8-7, while the Tigers won both midseason matchups by scores of 9-4 and 13-5.

The Starting Pitchers South Carolina will start senior righthander Aaron Rawl (3-1, 2.25 ERA) on the mound. The Lexington, SC native has started four games and pitched a total of 24.0 innings. He has allowed 23 hits and three walks while striking out 18. The Tigers will counter with junior righthander Josh Cribb (1-0, 2.76 ERA) on the mound Saturday. The Lake View, SC native has made three starts for a total of 16.1 innings pitched. He has allowed 22 hits and two walks while striking out 16.

South Carolina Overview South Carolina, led by ninth-year Head Coach Ray Tanner and ranked #4 in the nation, enters Saturday’s game with a 13-1 record after defeating Charleston Southern 1-0 on Wednesday. The Gamecocks are 1-0 in road games.

The Gamecock pitching staff sports a miniscual 2.36 ERA and .220 opponents’ batting average. Brent Marsh has yet to allow a run in 6.0 innings pitched and has a team-high three saves on the season. The entire staff has allowed just 27 walks while striking out 123 batters, good for a 4.56 strikeout-to-walk ratio.

Clemson Overview Clemson enters the series with a 5-5 record after losing to Winthrop on Wednesday. The team, which is 3-1 at home, is hitting .275 overall and is led by sophomore Tyler Colvin, who is hitting .414. Taylor Harbin is second at .381, as he has a team-best eight doubles. Kris Harvey has a team-high 12 RBIs. The team is fielding at a .975 clip as well, committing just 10 errors through 10 games in 2005. The pitching staff has a 4.55 ERA and .300 opponents’ batting average. Stephen Clyne has the team’s lone save. Opponents have stolen only 13 bases in 22 attempts against the Tiger defense as well.

Winthrop Shuts Down Tigers 8-2 Wednesday Kevin Slowey pitched a complete game four-hitter to lead Winthrop to an 8-2 win over Clemson on March 9 at Doug Kingsmore Stadium. The righthander allowed just two runs on four hits and no walks while striking out five. He faced the minimum three batters in eight of the nine innings. David Kopp suffered the loss in his first career start. The Eagles scored six runs in the first three innings and cruised to the win, totaling 12 hits in all. Kris Harvey had a two-run double to account for the Tigers’ only runs.

Fielding at a Record Rate Clemson has committed just 10 errors in its first 10 games and has a .975 fielding percentage. That mark is ahead of the Tiger single-season record of .971 set by the 2002 team. That team, which had the likes of Khalil Greene and Jeff Baker on the left side of the infield, committed 78 errors in 71 games. The 10 errors have been a main reason Tiger pitchers have combined to allow just four unearned runs in 2005. The freshman, middle-infield combination of Taylor Harbin (2B) and Stan Widmann (SS) are a big reason the team is fielding so well. Harbin has yet to commit an error in 47 chances, while Widmann has committed just four, as three of his four errors came in one game.