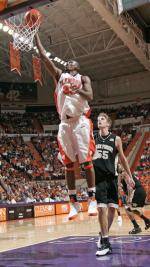 Tigers and Demon Deacons to Battle at Littlejohn on Wednesday Night

Clemson opened its ACC slate with a 61-55 win over FloridaState last Wednesday. It marked the first time since the 1997-98season that Clemson won its first ACC game of the year. Clemson hasa +3.47 turnover margin, fourth best in the ACC and a figure thatwould rank third best in Clemson history for a season. Clemson isforcing 19.33 turnovers per game, second best in the ACC and at apace to rank second best in Clemson history over a season.Clemson’s 11.07 steals per game is ahead of the single seasonrecord of 10.89 set in 1976-77. Clemson is off to a 12-3 start, itsbest 15 game start since 2002-03 when Clemson was also 12-3.Clemson has been up and down in terms of rebounding in its two ACCgames, and has had a direct effect on the outcome. Clmeson was +14on the boards in the win over Florida State and -18 in reboundmargin in the loss at Virginia last Saturday. Point guard VernonHamilton, a native of Richmond, VA, is Clemson’s scoring leaderwith a 11.9 average. Hamilton is shooting 48 percent from the fieldHe entered the season with a 40.4 percent field goal percentage. Hehas 11 double figure scoring games in the first 15 contests thisyear. He had eight double figure scoring games all of last year.Hamilton is trying to become the first Tiger guard to shoot 50percent or better over the course of a season since Michael Taitshot .517 in 1986-87. Shawan Robinson has 26 three-point goals and166 for his career. He needs just two to go past Chris Whitney(167) into third place on the Clemson career list. He needs 51points to reach 1000 for his career. Clemson has not beaten WakeForest since a 118- 115 double overtime victory at LittlejohnColiseum during the 2001-02 season, Skip Prosser’s first year atWake Forest. Akin Akingbala scored 16 points in a loss to WakeForest last year. That is Akingbala’s career high in an ACC game inhis four years at Clemson. Clemson coach Oliver Purnell and WakeForest coach Skip Prosser met 13 times when Purnell was at Daytonand Prosser at Xavier (1994-01). Prosser had a 7-6 advantage inthose games. The home team won 12 of the 13 games and Prosser wonthe only neutral site game. Clemson is averaging 7.4 madethree-point goals per game this year. That would be the second moston a per game basis in Clemson history if the season ended today.Nine different Tigers have led or tied for the team lead in scoringin games this year and no Tiger is averaging over 12 points pergame.