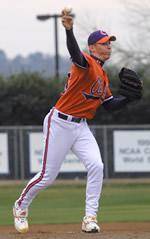 Clemson vs. Georgia Clemson (12-10) will travel to Athens, GA to take on Georgia (16-8) Tuesday at Foley Field. First pitch is scheduled for 7:00 PM. The game will be broadcast live on the radio by the Clemson Tiger Sports Network and can be heard live via the internet at ClemsonTigers.com. Live stats will also be available on Clemson’s website.

The Series Clemson and Georgia have met 201 times on the diamond, with the Bulldogs holding a 109-90-2 lead in the series that dates back to 1900. Georgia is Clemson’s second-most played rival in school history, trailing only South Carolina (265).

Last year at Foley Field, the Bulldogs won 9-3, upping its home winning streak over the Tigers to four games. Clemson defeated Georgia 7-3 at Doug Kingsmore Stadium in 2003. The two teams have played at least one game every year since 1959.

The Bulldogs lead 63-37 in games played at Georgia. Jack Leggett is 13-7 against Georgia as Clemson’s head coach, but is 4-7 in Athens.

The Starting Pitchers Georgia will start junior lefthander David Timm (1-0, 6.46 ERA) Tuesday. The Trenton, GA native has started four games and relieved in one other game. In 15.1 innings pitched, he has allowed 22 hits and seven walks while striking out 15.

Clemson will counter with sophomore righthander Kris Harvey (4-0, 3.28 ERA) on the mound. The Catawba, NC native has struck out 24 and allowed 19 hits in 24.2 innings pitched in a team-high six starts this year.

Georgia Overview Georgia, led by third-year Head Coach David Perno, is coming off a three-game sweep at the hands of Vanderbilt in Nashville, TN over the weekend and has lost four games in a row. The Bulldogs are 16-8 overall and 2-4 in SEC play. They are also 14-4 at Foley Field in 2004.

Josh Morris leads the team with a .379 batting average and is one of eight Bulldog regulars with at least a .300 average. Morris also has 11 of the team’s 28 homers and has a team-high 37 RBIs. No other Bulldog has more than 22 RBIs. Georgia, who is averaging nearly nine runs per game, is hitting .324 as a team with a .410 on-base percentage.

Clemson Overview Clemson enters Tuesday’s game with Georgia fresh off a three-game sweep of Wake Forest over the weekend. The three-game winning streak is the longest streak (winning or losing) of the season for the Tigers. Clemson moved into first place in the ACC standings with the sweep.

The Tigers are hitting .298 as a team, led by Brad McCann’s .413 batting average. Lou Santangelo had 12 hits in 20 at-bats last week to raise his average to .372. Herman Demmink has cemented himself as the leadoff batter after going 7-for-15 against Wake Forest. Travis Storrer missed all three games against the Demon Deacons with a finger injury. The Tiger pitching staff has a 4.42 ERA and .251 opponents’ batting average. Patrick Hogan has four of the team’s seven saves. Clemson also has a .962 fielding percentage.

In game one, Harvey and Andy D’Alessio hit home runs in the Tigers’ 13-6 win over Wake Forest. Jason Berken earned his fourth win of the year, allowing just three hits and three unearned runs in a career-high 7.0 innings pitched. Tony Sipp also picked up his first career save. Santangelo continued his hot hitting with a 3-for-3 performance. He also scored three runs and had two RBIs. Harvey and Tyler Colvin added two hits apiece to pace the Tigers’ 12-hit attack. Clemson was aided by five Demon Deacon errors.

In game three, Demmink had three hits and two RBIs to lead Clemson over Wake Forest 6-5. The Demon Deacons scored three runs in the ninth, but Collin Mahoney got Brad Scioletti to fly out to deep right-center with the tying run on second base to end the game. Robert Rohrbaugh picked up his first career win in pitching a career-high 6.0 innings. He allowed just two runs on six hits while striking out five. The Tigers hit five doubles and won their first one-run game of the season.

Demmink Providing Spark Head Coach Herman Demmink. The Midlothian, VA native had not batted leadoff all season until Clemson’s first ACC series from March 26-28. In three games at the top of the batting order against the Demon Deacons, Demmink, who entered the series hitting just .261, was 7-for-15 with four runs scored and three RBIs. Demmink, who is hitting .311 in 19 games this year, also stole a base and was instrumental in the Tigers’ three-game sweep.

Demmink also has enjoyed success against ACC competition. Last year, he was 21-for-46 (.457) in ACC regular-season games. That average would have been tops in the ACC if he had the minimum number of at-bats (60) needed to qualify. After his outstanding performance against Wake Forest, Demmink is 28-for-61 (.459) in his career against the ACC in the regular season. He is 26-for-106 (.245) in all other games.

Harvey 4-0 in 2004, 8-1 in Two-Year Career Sophomore righthander Kris Harvey (Catawba, NC) was hampered most of last season with shoulder problems, but has regained the form in 2004 that made him a fifth-round draft pick out of high school. The son of former Major League pitcher Bryan Harvey has made a team-high six starts and has a 4-0 record along with a 3.28 ERA. In 24.2 innings pitched (15.0 of which have come away from home), he has allowed just 19 hits while striking out 24. He was 4-1 in 2003 as a freshman, therefore is 8-1 in his two-year career as a Tiger.

Harvey has also been a producer at the plate this year. In 10 starts in the field, he is hitting .325 with three doubles, two homers, and 11 RBIs. Against Wake Forest from March 26-28, he shined, going 7-for-13 (.538) with three doubles, a homer, and seven RBIs in just three games. He was filling in for an injured Travis Storrer.