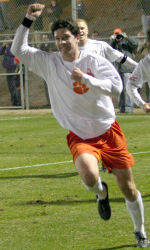 Tigers Advance to Final Four with 1-0 Win over Creighton

Senior forward Charlie Roberts scored the game winning goal with just 39 seconds remaining in the match to give Clemson a 1-0 victory over Creighton on Friday evening, sending Trevor Adair’s Tiger men’s soccer team to the Final Four for the first time since 1987.

Clemson now advances to play the winner of Friday evening’s New Mexico vs. California match in Cary, NC on December 9. With the Clemson victory, both teams now have identical records of 15-5-3.

The goal was the latest game winning goal in regulation in an NCAA tournament game in Clemson history.

It was a storybook finish for both Clemson Head Coach Trevor Adair’s and Roberts, his seldom used and often injured senior forward from Lawrenceville, GA. Adair began the week in Ireland where he attended the funeral of his father on Monday. He had missed coaching Clemson’s 1-0 Sweet 16 victory over Notre Dame last Sunday.

Adair arrived back in the United States late Tuesday to return to his team for practice. On Friday night his team advanced to the Final Four of the NCAA Tournament for the first time in his 15 years as a head coach. He had taken teams to the Final Eight five times in his career, including four times with Clemson, but have never reached the Final Four.

Roberts has had an injury riddled Clemson career that has included a torn ACL, torn MCL and severe hamstring injury. He had played in just eight matches in 2005 prior to tonight, just one as a starter. But, in his final game at Clemson’s Riggs Field, the red-shirt senior delivered the game winner.

“This is just an incredible night,” said Adair. “The guys promised me while I was gone that we were going to make it to the Final Four. I can’t put into words what this means to our program.

“Charlie Roberts is just a phenomenal story. He has been hurt much of his career, but has always worked hard to make a contribution. We figured we would just put him in the game in spots. In the second half when I sent him in I told him to get in the middle and score on a header. That is exactly what happened. He scored the game winner to send us to he Final Four. It is just an incredible turn of events.”

It was just the second goal of the year for Roberts, who had not scored since a 1-1 tie against Virginia Tech on October 21. Like the goal on Friday night, Roberts’s goal on October 21 also came on a pass from Nathan Sturgis.

“This is just an unbelievable feeling,” said Roberts, who had scored just two goals in the last two years combined prior to Friday. “I didn’t even practice yesterday because I was hurt. I never thought this could happen, but coach put me in and gave me a shot. This is a great win for us, a tribute to Trevor Adair’s and to all the guys on this team. Coach Adair deserves this night after what he has been through this year.”

The two teams had been outstanding on defense, especially recently so it was no surprise that the match was scoreless until the final minute. Creighton had allowed just two goals in its last seven matches and the Bluejays were coming off road upsets of sixth ranked Duke and ninth ranked Penn State. Clemson had not allowed a goal in the NCAA Tournament and had given up just five in the last nine games.

Both goal keepers were outstanding. Clemson’s Phil Marfuggi finished the game with his fourth consecutive NCAA Tournament shutout, the first Tiger goalkeeper in history to do that in four consecutive tournament games. Creighton’s Matt Allen had four saves as the Tigers took 17 shots.

Clemson had 13 corner kicks to just five for Creighton, but still the match was tied 0-0 entering the final minute. With 1:05 left Clemson’s top scorer, Dane Richards, chased a ball down the right sideline and was fouled by Creighton’s Andrew Peterson. Peterson had been one of Creighton’s top defenders on the evening and was a major reason Richards had gotten just one shot on goal the entire night.

Clemson’s Nathan Sturgis, a first-team All-ACC player and the league’s Defensive Player of the Year, lined up for a free kick from 45 yards out on the right side, the spot of the foul on Richards. He sent a hooking drive towards the goal mouth where Roberts, Clemson’s tallest player on the 18-man NCAA roster, leaped and headed the ball under Allen’s outstretched right arm and into the bottom left third of the net.

The sellout crowd of 6,680 fans (second largest in Clemson soccer history) cheered for many minutes as just 39 seconds showed on the scoreboard when the ball hit the net. It was the latest game winning goal in regulation for the Tigers since August 29, 2003 when Paul Souders scored with 26 seconds left to defeat Richmond. Ironically, Roberts assisted on that goal in 2003. But, it was the latest in school history in an NCAA tournament game.

The victory sends Clemson to the Final Four for the seventh time in school history, the first since 1987 when Clemson won the National Championship. Clemson has won the national championship twice, in 1984 and 1987.