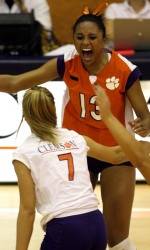 Tigers Advance In NCAA Tournament With 3-1 Win Over Alabama

CLEMSON, SC – Danielle Hepburn and Lia Proctor each tallied 17 kills in leading the Clemson volleyball team to a 3-1 (30-25, 30-27, 31-33, 30-26) victory over Alabama on Friday night in the first round of the NCAA Tournament. The Tigers will face #8-seed UCLA in the second round on Saturday with play scheduled to begin at 7:00 pm from Jervey Gym.

“This was an exciting win for us,” said Clemson Head Coach Jolene Jordan Hoover. “I thought Alabama played fantastic. They gave us everything that we could handle and I’m just really excited to get one and still be alive (in the tournament).”

Murphy and Hepburn combined for a pair of crucial blocks in the fourth game that swung the momentum Clemson’s way for a 24-23 lead, its first since holding a 9-8 advantage. The duo then recorded another block for the Tigers’ 26th point to start a three-point run and put them on top by four.

With match-point on the line, Abbott sent a powerful attack over the net to secure Clemson’s first NCAA Tournament victory since 1998.

“Playing at home was a huge advantage,” Abbott said. “We had an amazing crowd tonight and are excited for tomorrow’s match.”

The Tigers scored the first three points of the contest and went on to win the first game, 30-25.

The teams then battled through 21 tie scores and 12 lead changes in game two with Clemson rallying for three straight points at the end for the 30-27 victory. The Tigers hit .394 in the frame, led by Proctor’s .455 figure and her seven kills.

Game three was just as tight as the score was tied on 17 occasions and changed hands nine times. After Alabama took a 20-19 lead, Proctor posted three straight kills as Clemson rallied to regain a 23-20 advantage. However, the Crimson Tide responded with its own four-point stretch and held off the Tigers for a 29-27 lead. Clemson then held a 31-30 advantage but Alabama scored the final three points to eke out the game-three victory.

The Crimson Tide’s Brooks Webster recorded seven of her team-leading 19 kills in the final game, while setter Brigitte Slack finished with 60 assists for the match.