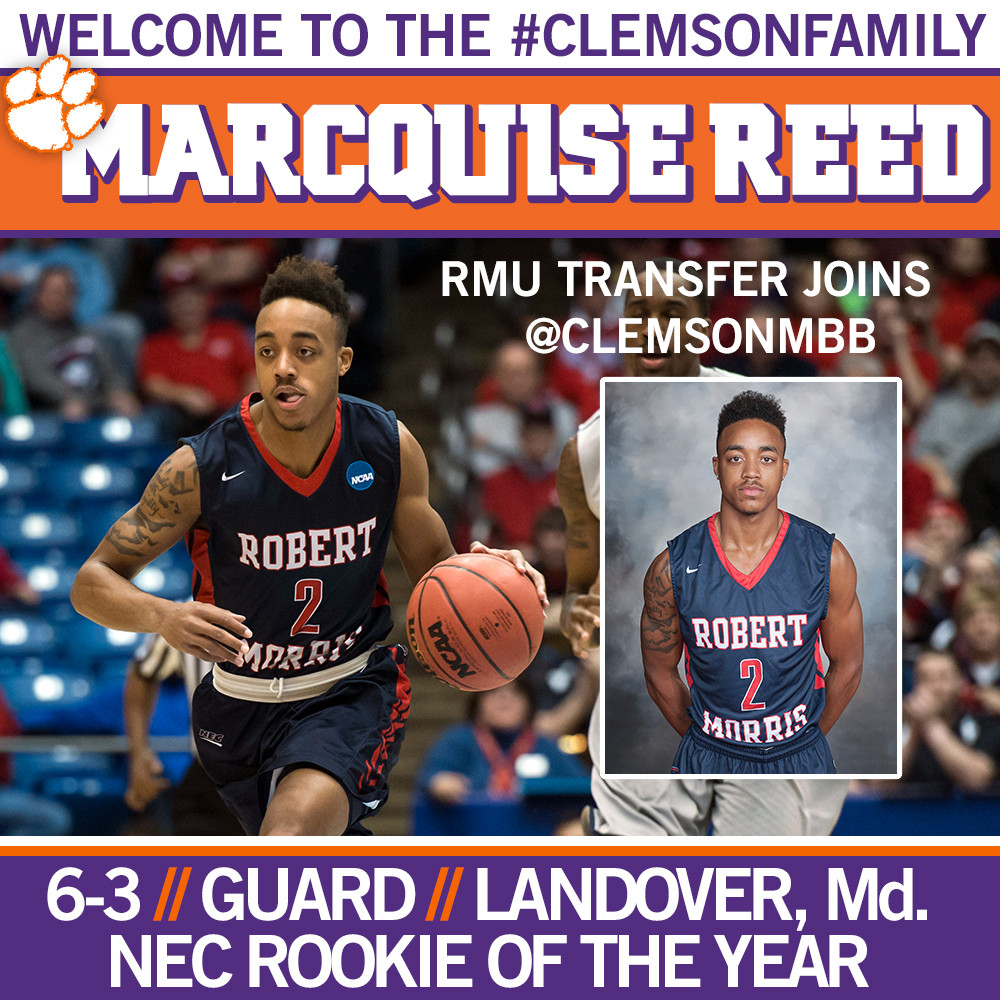 CLEMSON, S.C. — Marcquise Reed, a 6-3 guard at Robert Morris University last season, has signed a financial aid agreement to transfer to Clemson. Head Coach Brad Brownell made the announcement Wednesday. Per NCAA rules, Reed is required to sit out the 2015-16 season but has three seasons of eligibility remaining, beginning in 2016-17. He joins Vanderbilt transfer Shelton Mitchell as the newest additions to the roster.

“Marcquise is a great addition to our program,” Brownell said. “We’re certainly excited by his ability to score the basketball. It’s nice to have someone who has produced at a consistent level in college, particularly with some big games against ACC competition. Having he and Shelton compete against our guys in practice will help our program not only next season, but also well into the future.”

A native of Landover, Md., Reed appeared in 35 games for the Colonials as a freshman in 2014-15. He averaged a team-high 15.1 points per game, while shooting 49 percent from the floor and 41.3 percent behind the three-point arc. Reed also connected on 78 percent of his free throw attempts, while tallying 67 steals. He was named Northeast Conference Rookie of the Year for his efforts.

Reed burst onto the scene by scoring 24 points on 10-15 shooting at North Carolina in only his second career game. He played against the Tigers in Littlejohn Coliseum last season, notching 21 points off the bench on 9-14 shooting. Reed also performed well for RMU in the NCAA Tournament, posting 19 points against North Florida in the First Four before scoring 22 in the second round against eventual champion Duke.

Reed averaged 31.2 points and 4.6 rebounds per game as a senior at Capitol Christian Academy in 2013-14. He was an honorable mention All-Metropolitan performer and scored 40 or more points on five occasions.