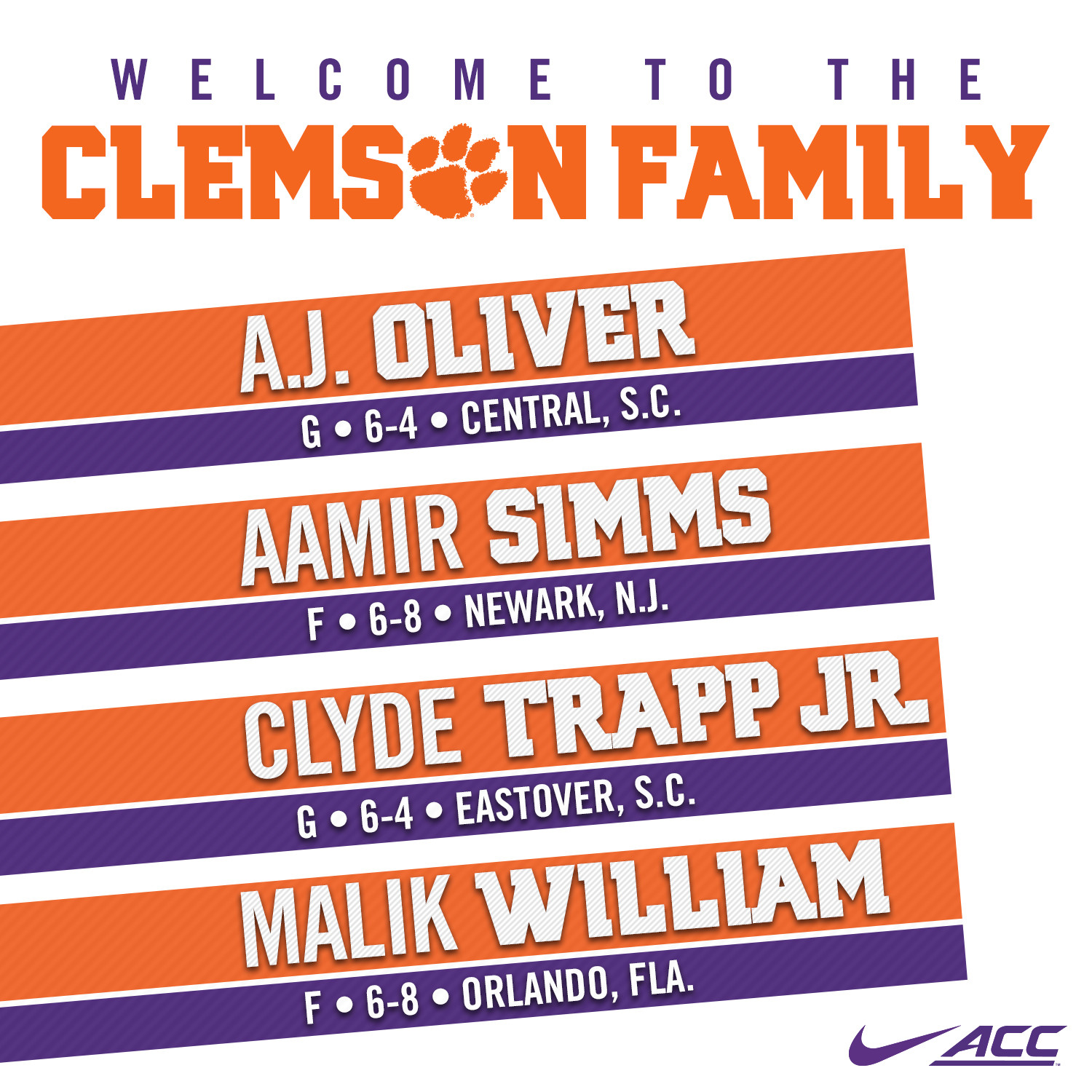 “This class has a very good mix of size, athleticism and skill level,” Brownell said. “There has been positive momentum within our program the last couple of years on the recruiting trail, and that is evident with this class. Our assistant coaches did a great job of targeting some of these guys early and recruiting several of them for a long time.”

Oliver, a 6-4 shooting guard from Seneca, S.C., is the son of Clemson women’s head coach Audra Smith. His father, Anthony, was a team captain at the University of Virginia in 1992. He is rated a four-star prospect by ESPN, Rivals and Scout. Oliver averaged 21.3 points per game at Daniel High School and was named first-team all-state at the AAA level in 2015-16. He stood out on the AAU circuit this summer, which included a stint with the U.S. Select Team at the adidas Eurocamp in Italy.

“A.J. comes from a great basketball family, and we’ve had the pleasure of getting to know them for a long time,” Brownell said. “He’s an outstanding shooter with a high basketball IQ. I really respect how hard he’s worked to develop into the prospect he is today. He played at the highest levels of AAU basketball, and brings a wealth of experience to our program.”

Simms, a 6-8 power forward from Palmyra, Va., was second-team all-state at Blue Ridge School in 2015-16, where he was a teammate of current Clemson freshman Scott Spencer. Simms is rated the nation’s No. 90 overall prospect in the class of 2017 by Rivals and No. 116 by 247Sports. He is a four-star prospect according to ESPN and Scout as well, coming off a season in which he averaged 13.4 points and 8.8 rebounds per game for Blue Ridge’s championship finalist.

“Aamir is a strong power forward who has a very good skill level for his size,” Brownell said. “He has excellent hands, and as a result, is a great rebounder. He has a good feel for the game, loves to compete, and should have the opportunity to play early in his career because of his size, physical ability and toughness.”

Trapp, a 6-4 guard from Hopkins, S.C., is rated a three-star prospect by Rivals. Trapp plays for Lower Richland High School, the same school that sent former All-ACC guard Edward Scott to Clemson. Trapp was coached by Scott on the AAU circuit. Trapp was the Offensive MVP of the Big Shots SC Top 100 event in September, and averaged 13 points per game as a junior for Lower Richland last season.

“Clyde had a strong interest in Clemson from the outset,” Brownell said. “He emerged on the recruiting scene this past summer after changing positions and getting more exposure. He is an exceptional athlete with good ball skills and vision, who has all the tools necessary to be a good defender in our program. He continues to get better, and I love the fact that he is a versatile athlete who can play multiple positions.”

William, a 6-8 forward from Winter Park, Fla., is listed as a three-star prospect by both Rivals and Scout. He is also the nation’s No. 110 overall prospect by 247Sports. William averaged 13.9 points and 10.9 rebounds per game for First Academy last season, when he was a second-team all-state selection.

“Malik is a highly skilled frontcourt player and an elite-level passer,” Brownell said. “He really has a great feel for the game, and has shooting range out to the three-point line. He will be a very good rebounder as he puts on weight and adds strength throughout his career. We’re excited by his skill level and feel he has a bright future in our program.”