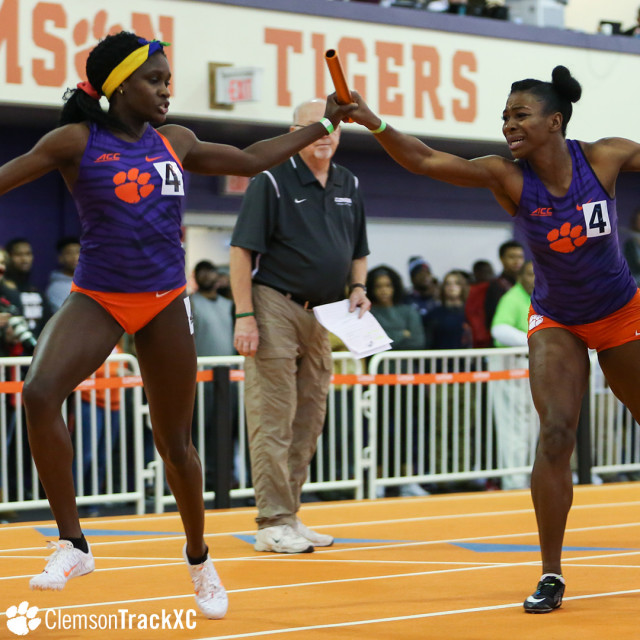 CLEMSON, S.C. – The Clemson track & field team set season bests in both the men’s and women’s 4x400m relays to conclude the annual Tiger Paw Invitational Saturday, which hosted 17 combined top-25 teams in the NCAA. Cordell Lamb, Deonte Tolbert, John Lewis and Jeffrey Green posted a time of 3:07.36 – a season best by nearly one second – to place fifth in a competitive field that saw the top-2 finishers (USC and Florida) shatter the previous NCAA record. On the women’s side, Olivia James, Kendra Clarke, Kamryn McIntosh and Fellan Ferguson completed the eight laps in 3:37.15, in route to notching a season best in the event. The men’s time currently ranks first in the ACC, while the women’s is good for No. 2 in the conference.

Freshman Logan Morris shattered her PR in the women’s 3000m by nearly 20 seconds after crossing the finish line in 9:28.49. The Spartanburg, South Carolina, native saved her fastest split for the final lap (34.85), and finished more than 16 seconds faster than the second-place finisher.
In the first event of the day, Ferguson and McIntosh placed second and fourth, respectively, in the women’s 800m run. Ferguson achieved a time of 2:06.42, while McIntosh’s time of 2:06.92 set a new personal record for the freshman by four seconds.

On the men’s side, Jeremiah Green picked up where left off from the Bob Pollock Invitational (Jan. 26-27) in the triple jump, nabbing a best-leap of 15.75m Saturday. Green, a fifth-year transfer from Alabama, set the then-No. 2 jump in the ACC and personal best of 15.77m two weeks ago.

In the men’s 800m, junior John Lewis continued to display consistency, posting a time of 1:49.24 to place fifth overall in a field of 37 competitors. Lewis barely missed his personal record of 1:49.22. The Philadelphia native currently holds the top men’s 800m time in the ACC.
A total of 10 facility records fell this weekend, including USC’s men’s 4x400m relay. The Trojans’ Zach Shinnick, Rai Benjamin, Ricky Morgan Jr., and Michael Norman turned in the world record (unofficial) with a blistering time of 3:01.98.