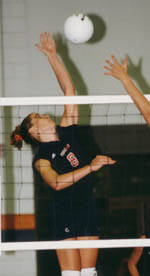 Meredith Kirtland and Jodi Steffes each recorded double-doubles to lead the Tigers. Kirtland had a game-high 21 kills with 11 digs, four block assists, and one service ace while Steffes tallied 17 kills with 15 digs. Kiki Dallao had a team-high 20 digs while Missy Kudelka dished out 27 assists with two service aces and eight digs. Clemson outhit Auburn .239 to .209

Clemson plays Navy on Saturday morning at 10:00 a.m. in the second round of the Auburn Invitational, and concludes the tournament with a 4:00 p.m. match against Appalachian State.