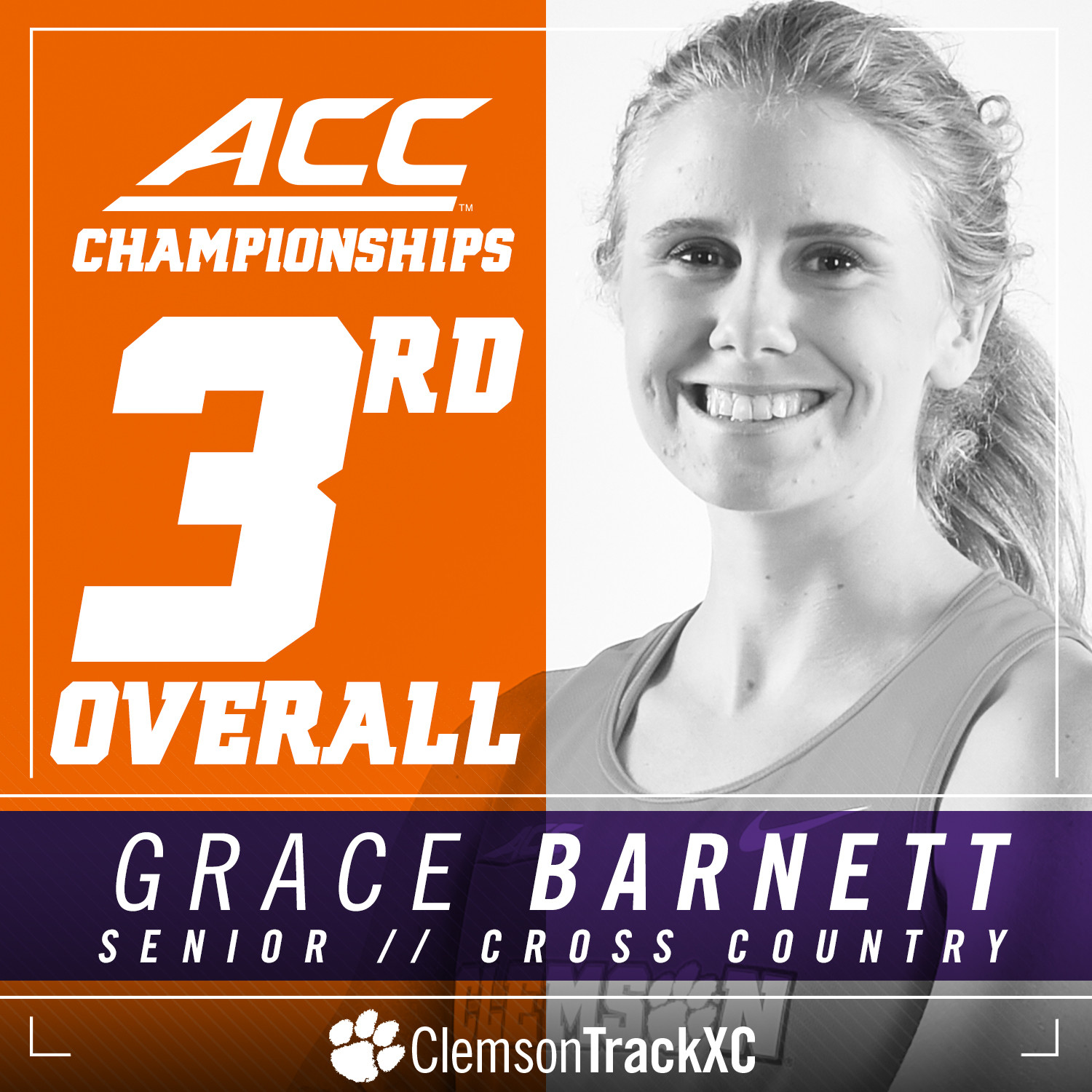 CLEMSON, S.C. — Grace Barnett produced the best finish by a Clemson female at the ACC Cross Country Championships in nearly 20 years on Friday, propelling the Tiger women to a sixth-place team finish. NC State won the women’s team competition, but Clemson posted its best showing since also placing sixth in 2011. The Tigers owned the tiebreaker ahead of Pittsburgh and Wake Forest by virtue of Barnett’s individual finish.

“The women ran extremely well,” said Mark Elliott, Clemson’s head coach. “Grace was second to last as a freshman and now third in what I consider the toughest conference in the country. She’s the reason you coach. A walk-on athlete who is now one of the best in the ACC. What an awesome performance. I’m very proud of how we ran collectively and individually. It shows that we’re more than headed in the right direction. We have a shot to make a run at an NCAA Championship berth.”

Barnett’s third-place finish was last matched by a Tiger female in 1997, when Tina Jensen achieved the same position. Jensen was also the most recent Tiger to earn multiple All-ACC honors in women’s cross country.

“The last 800 meters are uphill, so the challenge is to finish by staying tall and strong,” said Barnett, whose parents and high school coach were in attendance Friday. “It was very special. Halfway through the race, Coach (Michael) Porter told me how well everyone was doing. That drove me to run that much harder. He has held me to a higher standard, but it was a motivating factor for me. And he holds us all to that same standard, and it showed today.”

A pair of freshmen were outstanding for the Tigers on Friday. Logan Morris was the fifth-highest finishing freshman, producing a 6K time of 20:38.0 en route to her first All-ACC honor. She gave the Tigers two all-conference performers for the first time since 1998. Jenna Gearing was 55th overall, with a time of 21:28.8. Erin McLaughlin and Morgan Wittrock closed out the scoring for the Tigers.

“We were aggressive early and tough late,” Porter said. “The ladies listened and ran great races all around. It was as close to perfect as it could be for us. Three of our top five were freshmen. They have been great. It’s a blessing for us to be able to throw them in the mix. They’ve filled some gaps, and are a very competitive group.”

On the men’s side, a young Tiger team was relegated to a 14th-place finish. But several Tigers responded with 8K personal bests. Micah Williams led Clemson individually with a 53rd-place effort, followed closely by junior college transfer Mpho Makofane in 56th.

Next up, the teams head to Charlottesville, Va., for the Southeast Regionals on Friday, November 11.