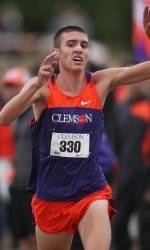 “We were fortunate to have some ACC schools come out to today’s meet,” said Lawrence Johnson, Clemson’s Director of Track & Field and Cross Country. “It always feels good to be in front of one of the perennial powerhouses in cross country in Florida State. They’re always a strong team on the national level, so it shows that our group is really headed in the right direction.”

The women won the meet with a consistent group across the board. Four runners finished in the top 10 for the Tigers, led by Alyssa Kulik in fourth and Kim Ruck in fifth place. Kulik turned in a time of 21:00.27 over the 6,000-meter course. Ruck was not far behind at 21:04.29. The biggest surprise on Friday was the seventh-place effort by sophomore Natalie Anthony. She ran a personal best, clocking a time of 21:15.06. Kate Borowicz was ninth in her first official meet in a Clemson uniform, with a time of 21:17.85. The final scorer on Friday was Alyssa Henshaw, who came across the line in 20th place at 21:44.91.

McCormack led almost wire-to-wire in dominant fashion over the men’s 8,000-meter race. The native of Gainesville, GA easily lowered his personal best to a time of 23:56.72. He finished 10 seconds ahead of his closest competitor, Ryan Hopkins of Davidson.

“I can’t say enough about Ty,” Johnson said. “He came out here and blew a great field away. He got a victory and set a personal best in the process. To finish in front of some of the quality runners they have at Florida State and Virginia Tech is tremendous for our team.”

“It feels really good to run that kind of time at this point in the season,” McCormack said. “This is the same course we’ll run for the ACC Championships, so you could say this was a confidence booster for me.”