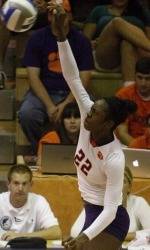 Clemson was ranked 58th in the initial NCAA Volleyball RPI, and road wins at No. 145 Virginia and No. 66 Virginia Tech could help boost that mark. The Tigers are also in fifth place in the conference, making this a key weekend to create separation and move up.

The Tigers swept the Hokies last season in a pair of tight matches. Clemson will play in Blacksburg on Sunday before returning home. The Tigers sit just one spot in the standings above the Hokies, who use a balanced offensive attack, with three players averaging more than two kills per set. The Hokies are an aggressive serving team, led by Justine Record, who ranks second in the ACC at 0.34 aces per set. Clemson holds an 11-6 all-time mark against Virginia Tech.

Clemson enters the match coming off a pair of losses to two nationally ranked teams, Miami and Florida State, on the road. Before that, the Tigers had won nine of 11 overall. Five Tigers currently average more than two kills per set, led by Sandra Adeleye, who at 3.19 is 6th in the conference. Serenat Yaz has back-to-back double-doubles and is averaging 2.84 kills and 2.48 digs per set.

Clemson will play these two on the road before returning home to take on Duke on Oct. 28 in the annual Dig Pink match. The Tigers also take on Wake Forest at 5:00 pm Oct. 29, before heading on the road for four more matches.