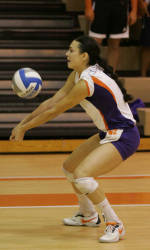 It was a career night for sophomore Sandra Adeleye, who led the Tigers with a season-high 22 kills, one short of her career high of 23. She also added nine blocks, tying her career high.

The Tigers will close out the season next Friday when they travel to Atlanta to take on Georgia Tech at 7:00 pm.

Clemson, which entered the match ninth in the nation in blocking, added another 14 on the night, including five solo blocks.

The first set saw 14 ties and six lead changes before the Tigers finally came out on top 30-28. Simmons and Adeleye led the Tigers with 6 kills each. Although the Wolfpack out-hit the tigers .306 to .259, Clemson used key errors from N.C. State to swing the momentum in their favor. Trailing the set 22-24, the Tigers used a blocking error and an attack error by the Wolfpack to tie the set at 24. The teams then traded points six times before the Tigers jumped out to a 28-27 lead. N.C. State tied the game at 28, but the Tigers got a kill from Natalie Patzin and an attack error by the Wolfpack to take the set.

In the second set, N.C. State tied the match at one, winning 25-23. Adeleye again led the Tigers in the set with six kills, while Serenat Yaz added four. Clemson used two straight kills from Adeleye to take a 19-14 lead, however the Wolfpack then rattled off eight straight points to take a 22-20 lead that Clemson couldn’t recover from. The Tigers clawed their way back to within one at 22-21. The teams then traded points, however, after an error by the Tigers, the Wolfpack ended with a kill to take set two 25-22.

Clemson took a 2-1 lead in the third set, winning 25-21. It was another close one in which the Tigers and Wolfpack saw 14 ties and 10 lead changes. The Clemson defense held the Wolfpack to hitting just .191 in the set. With the set tied at 16, the Tigers used a kill from Adeleye and attack error by N.C. State to take an 18-16 lead. But, after a timeout, the Wolfpack rallied for four straight points to take a 20-18 lead. But, after a Clemson timeout, the Tigers tallied six straight points to take a 24-20 lead. After a Wolfpack kill, Adeleye ended the set for the Tigers. She added six kills for the third straight set.

The fourth set was seemingly all Tigers, coming out on top 25-17. The Tigers used five blocks and 25 digs to hold the Wolfpack to a .023 hitting percentage. Adeleye and Yaz each notched four kills in the set. After N.C. State took a 12-8 lead, Clemson called timeout and then rallied off nine straight points to take a 17-13 lead, a run that included four blocks by the Tigers. The Wolfpack couldn’t overcome the deficit and ended the match on a service error.