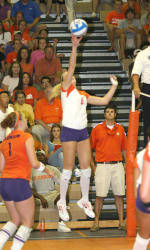 Tiger Volleyball To Play Host To Wake Forest and Duke

CLEMSON, SC – The Tiger volleyball team (13-6, 8-3 ACC) will begin the second half of the ACC schedule this weekend, welcoming Wake Forest and #25 Duke to Jervey Gym. Clemson’s match against the Demon Deacons (11-9, 7-4 ACC) is slated to begin at 7:00 pm on Friday night and is scheduled as the Tigers’ Dig For A Cure match. Fans may pledge an amount of money per dig recorded by the Clemson team, or they may donate a sum to the cause.

The Tigers will then play host to the 25th-ranked Blue Devils, who enter the weekend with an 18-2 overall record and an unblemished 11-0 mark, on Saturday at 6:00 pm. Both matches will be available on livestats via www.clemsontigers.com.

Clemson’s sophomore standouts continue to lead the team, as Danielle Hepburn and Jeannette Abbott remain atop the conference standings for hitting percentage and kills per game, respectively.

Hepburn is also ranked eighth nationally with a 1.68 blocks per game average. The Miami, Fl native has posted 114 total blocks in 68 games played to go along with her .383 attack percentage. The hitting figure is also listed nationally at #30. Abbott, a native of Downers Grove, IL, has tallied 309 kills, for a 4.54 kills per game average, to lead the Tigers. Didem Ege boasts a team-best 314 defensive saves, while Kelsey Murphy leads the Tigers with 567 set assists.

Scouting the Demon Deacons Wake Forest will bring an 11-9 overall record and a 7-4 ledger against ACC opponents into Jervey Gym on Friday night. The Demon Deacons dropped a pair of matches on the road in Florida last weekend, but had won six of seven prior to that.

Overall, Wake Forest is averaging 13.88 kills per game with a 2.34 blocks per game figure.

Clemson vs. Wake Forest, The Series The Tigers won a 3-1 decision over the Demon Deacons earlier this season in Winston-Salem, NC. The victory gave Clemson its 19th win in 29 contests against Wake Forest all time. The Tigers also have a 9-2 record when facing the Deacs on their home court, including a 3-2 victory during the 2005 season at Jervey Gym.

Scouting the Blue Devils Duke, who entered the national rankings this week at #25, begins the weekend on an 11-match winning streak that dates back to the Blue Devils’ 3-0 victory over Clemson on Sept. 22 in Durham, NC. Overall, Duke boasts an 18-2 record with a perfect 11-0 mark in league play.

As a team, the Blue Devils are averaging 1.89 service aces per game, as Polly Bendush and Rachael Moss have each tallied 21 on the year. Duke is averaging 16.88 kills per game with a .248 hitting percentage, while limiting opponents to just 11.89 kills per game and a .119 figure.

Clemson vs. Duke, The Series The Blue Devils increased their lead in the series score over Clemson to 29-17 with a 3-0 victory earlier this season in Durham, NC. Duke also holds a 10-8 advantage in matches played on the Tigers’ home court. However, Clemson claimed a 3-1 victory in Jervey Gym last season. Danielle Hepburn posted seven total blocks.