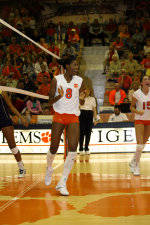 Thursday night’s match will be video streamed on the Internet as well as available on livestats. Fans can access the broadcast at www.ACCSelect.com and GameTracker on www.clemsontigers.com. Fans can also follow Friday’s action with livestats.

Junior Danielle Hepburn leads both the Tiger offense and defense with team-bests for kills (322) and blocks (123) for the season. The Miami, FL native is also hitting an impressive .389 percentage which ranks 18th nationally. Senior and fellow middle Meghan Steiner also boasts an extremely accurate figure with a .393 percentage that is listed at #17 in the nation. The duo has helped the Tigers to post an ACC-best .272 team hitting percentage, while ranking 16th in all Division I for the statistic.

Natalie Mullikin leads the squad with 359 kills while hitting a .330 percentage. She also owns a team-best 111 total blocks, including 28 solos. Setter Kelsey Jones has tallied 803 for the year, while Megan Thornberry has recorded a Deac-high 371 defensive saves.Overall, Wake Forest is averaging 13.91 kills per game while blocking 2.54 attacks per set.

Clemson vs. Wake Forest, The Series Head Clemson Coach Jolene Jordan Hoover will be taking on one of her former players on Thursday, as Heather Kahl Holmes will bring her Demon Deacons to Jervey Gym. Holmes was a four-year letterwinner for the Tigers from 1991-94. She was named to the ACC’s 50th Anniversity team in 2002 and still ranks third in school history for assists with 3,722. Clemson defeated the Deacs earlier this season in Winston-Salem, NC, winning by a 3-1 margin to increased the Tigers’ lead to 21-10 all time against Wake Forest.

Scouting the Blue Devils Duke will bring a 20-4 overall record and a 15-1 ledger in conference matches to Jervey Gym on Friday night. The Blue Devils’ lone loss in ACC action was at the hands of the Clemson Tigers on Oct. 13.

A trio of seniors leads the Duke team, as Carrie DeMange leads the league and ranks 14th nationally with a 5.05 kills per game average. Setter Ali Hausfeld then owns an ACC-best 14.10 assist per game figure that is also listed third in the nation. Defensively, libero Jenny Shull has recorded 497 digs on the year. Overall, the Blue Devils are hitting a .266 percentage while holding the opposition to a .182 figure.

Clemson vs. Duke, The Series The Tigers posted an upset of the then-ranked #13 Blue Devils earlier this season in Durham, NC. Clemson led, 2-0, in the match before Duke rebounded to claim the third and fourth games. The Tigers then regrouped to win the fifth and deciding game, 15-10, for their first win over the Blue Devils in four tries. However, Duke still holds a 30-18 all-time advantage over the Tigers.